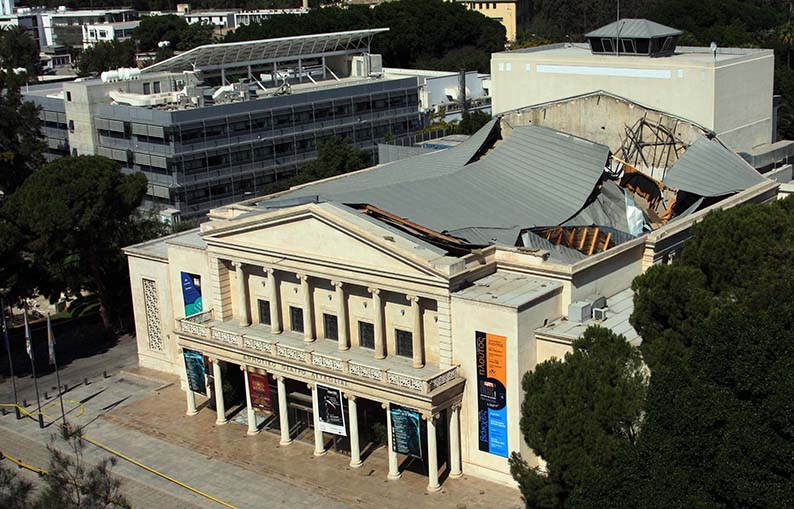 The municipal theatre after the roof collapsed in 2008

House President Demetris Syllouris said on Monday he would start discussions on the need for larger premises for the House of Representatives, including extending its present site to incorporate the currently derelict municipal theatre next door.

Syllouris said both the state and the city of Nicosia would be better off if parliament took over the theatre once it had been suitably repaired.

The House president said any plans to reopen it as a theatre were wrong and mostly based on sentiment.

The theatre has no parking and it would create security problems for parliament that would have to be managed by redirecting traffic in the area.

“The Nicosia municipality cannot ask for 20-30 parking spaces for a small bar and then everyone turns a blind eye to the construction of a 1,200-seat theatre,” Syllouris said.

He told reporters that they agreed to start discussions with the town planning department about the wider area. Talks would include the public works department, Nicosia municipality and other interested parties.

“If a way is found to host parliament, I am not inclined to support the view of parliament leaving Nicosia municipality,” he said. “If not, other solutions must be examined, one of which being the entrance to Nicosia or the conference centre.”

It is not the first time the proposal has been mooted in recent years following the collapse of the theatre’s roof almost 10 years ago.

The building lies just across the Cyprus Museum and is next door to the House of Representatives. Work to build the theatre began in 1958 but money issues delayed its completion and the first performance did not take place until March1967.

The municipality had spent €5.6 million refurbishing the building only two-and-a-half years before the roof collapsed on June 11, 2008, just a day before hundreds of school children were to use the place for an end-of-year performance.

It has stood unused ever since and the courts have yet to decide whose fault it was.

In July 2014, the cabinet decided to restore the theatre and turn it into a cultural centre after its renovation as a theatre was shelved because of money problems. Nothing has been done since.

Likewise, parliament was meant to be getting its own building on Pasydy hill near the finance ministry, but the discovery of important antiquities, the high cost, and the never-ending delays have since made the whole idea financially unviable.

Using the municipal theatre and extending it to the current House would save tens of millions of euros, Syllouris had said last September.

An obsession with pics