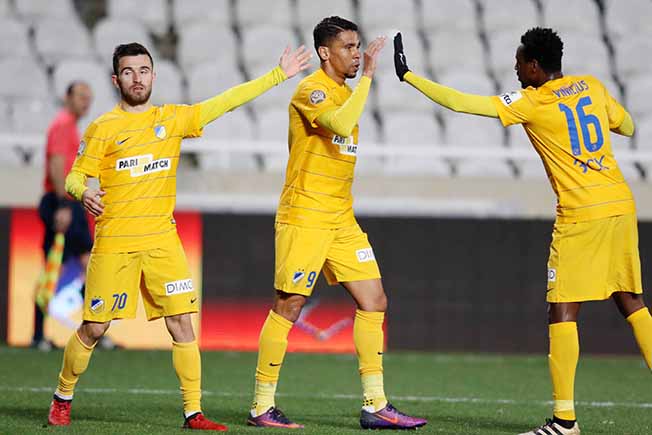 Apoel increased their lead at the top to three points as they put seven past AEZ, while second-placed AEK could only draw against Aris in Limassol.

Elsewhere, AEL and Apollon moved to within two and three points respectively off second place following their weekend wins over Nea Salamina and Ermis Aradippou while Omonia fell further behind the top group as Anorthosis fought back from two down, to claim a point.

Apoel needed just 15 minutes against AEZ to tie up the three points as they raced into a four-goal lead with new signing, 33-year-old Spanish striker David Baral, getting off the mark.

It was all too easy for the champions with Stathis Aloneftis opening the score with a sublime strike before Barral, Sotiriou and Merkis made certain of the three points.

Baral got his second just before the break and even though Apoel took their feet off the pedal they still managed two more goals after the break through Igor de Camargo.

Apollon continued their impressive run under Cypriot coach Sofronis Avgoustis, recording their sixth consecutive win, as they made light work of their seemingly tough game against Ermis Aradippou.

Apollon’s Pedro was the star as he was the player who won the penalty that got the Limassol team off the mark (converted by Alex da Sila), scored the second on the stroke of half-time that ultimately killed the game and then provided the assist for Maglica to put the icing on the cake.

AEL, despite falling behind to an 11th minute goal from Nea Salamina’s Kolokoudias, fought back and scored three times to record their 13th win of the season.
Francisco Medina Luna (Piti), was the star of the show as he scored twice, just before and after the break to give his team a deserved lead before Mezga wrapped up the points with AEL’s third in the 68th minute.

Omonia let slip a two goal lead and had to share the points with Anorthosis at the Antonis Papadopoulos. For yet another game Omonia’s defence let them down as they failed to pick up their markers in dead ball situations and allowed first Victor and then Calderon to head past helpless Omonia keeper Panayi.

Omonia had taken an early lead through Renato Margaca with Dimitri Christofi adding a second in the 65th minute before the Famagusta team’s fightback.

AEK continued their lacklustre performances this time against relegation threatened Aris. This was their third draw in eight games against teams hovering in or around the relegation zone.

In the final weekend game Anagennisi Dheryneia were yet again unable to claim their first win of the season despite taking the lead twice against Karmiotissa.

Furtado and Rivas were the scorers for Dheryneia while Polianec and a Pasek got the goals for Karmiotissa, the second two minutes from the end.

Ethnikos Achnas beat Doxa 2-0 on Monday night, in a match interrupted for 35 minutes due to floodlight failure at the Dasaki stadium.

Boy remanded for robbery of girls at knifepoint

Pictures are given sound