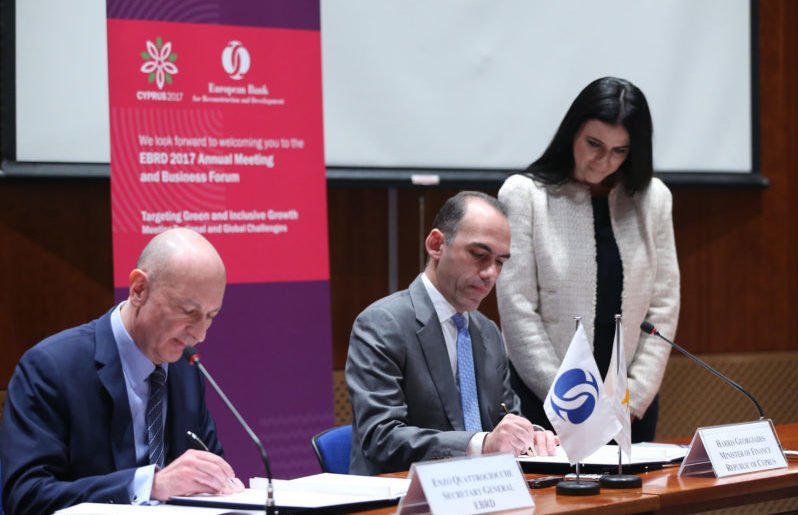 Finance minister Harris Georgiades and Enzo Quattrociocche, secretary general of the European Bank of Reconstruction and Development (EBRD), signed on Tuesday a memorandum of understanding setting out Cyprus’s responsibilities in organising the bank’s annual general meeting (AGM) in May, the finance ministry said.

The event, which will also include a business forum with panel discussions, will be “the first ever such meeting of an international financial institution to take place in Cyprus,” and is expected to attract delegations from 65 countries and up to 2,000 dignitaries, including investors, entrepreneurs, professionals in international media, the finance minister said according to the emailed transcript of his speech at the signing ceremony in Nicosia.

The finance minister described the AGM as a unique opportunity for Cyprus “to present itself as an attractive, safe and stable jurisdiction to an international audience, as a country which has achieved a remarkable economic recovery and which now offers excellent business and investment opportunities across the sectors”.

The EBRD, founded in 1991 by a group of European countries including Cyprus as part of an initiative to help economies of East and Central Europe as well as Central Asia to make the transition into the market economy, pledged in 2014 to inject up to €700m into the Cypriot economy.

The London-based bank already made available €220m of the earmarked funds and owns 5 per cent in Bank of Cyprus and 5.4 per cent in Hellenic Bank.

Quattrociocche said that the EBRD supports Cyprus’s reunification and the reconciliation of the island’s Greek and Turkish communities and stands ready to “support efforts to bolster its economic development for the benefit of all communities of the island”.

“Only inclusive growth is sustainable growth,” he said in reference to globalisation. “This is reflected in our new concept of the six transition qualities competition, governance, sustainability, inclusion, resilience and integration, which make for a successful, modern and resilient economy”.

“What is needed is not less, but better globalisation,” which takes into account its impact on economic development on societies and the environment, the bank’s secretary general said.