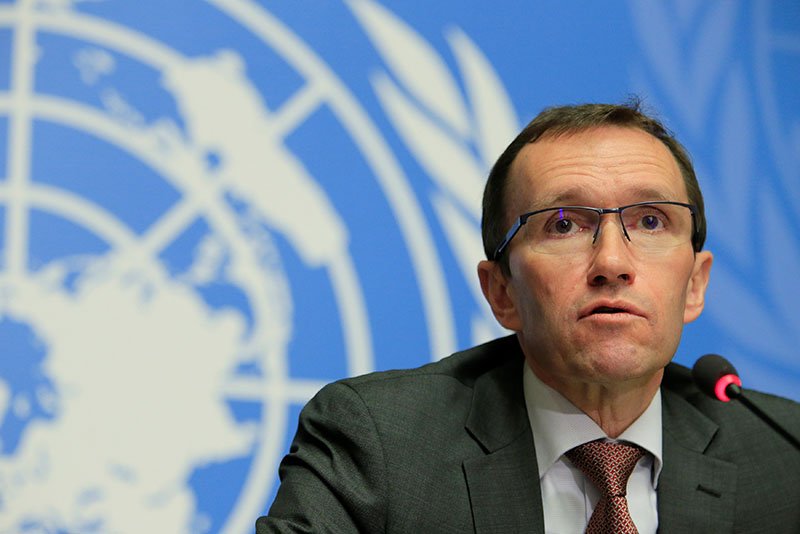 The United Nations Security Council will become directly involved in ongoing talks to settle the Cyprus problem, which entered the final phase earlier this year with the start of an international conference, UN special envoy Espen Barth Eide said on Monday.

Speaking after briefing the council on the latest of the 20-month talks, Eide said the body is “constantly involved”, but whatever comes out of the negotiations “will need to be presented at the level of Security Council”.

“The fact that the international conference on Cyprus has now started marks a pivotal change in the process, because until now it was negotiations between the two sides – which, of course, continue, because there are still issues that have to be solved – but the conference is also set on an international level, which means that finally all issues are on the table,” he said.

Although difficult key issues remain, some of which pertain to the Cypriots themselves while others to international issues, the Norwegian diplomat said, the external players – Cyprus’ three guarantor powers, and the European Union – “come with a strong commitment to find solutions, not find more problems”.

“There’s been enough problems in Cyprus, it’s time to solve them – it’s possible, it’s within reach, and the support of the Council is crucial in this respect,” he said.

Elizabeth Spehar, chief of the UN peacekeeping mission to Cyprus, who also briefed the body on the work UNFICYP has done in Cyprus, said the council has “for some time now” been interested in how the mission is preparing for contingency planning in the eventuality of a settlement.

“Of course, the issue of implementation is about how Cypriots will eventually implement a deal, but we have been told clearly from the sides that they would like strong UN support to help implement a deal, and so we have been encouraged by the Council to work in earnest on this issue and we will of course continue to do so,” she said.

During the Q&A session, Eide dodged a question on reportedly “spicy moments” UN chief Antonio Guterres had with Greek Foreign minister Nicos Kotzias at the international conference in Geneva on January 12, saying there was no disagreement other than the date when the conference would resume at deputies’ level.

“The conference on the 12th was concluded successfully by setting up a working group at the level of deputies,” Eide said.

“There was no other disagreement other than whether this group would start meeting on the 13th or next week, and they started on the 18th so that was successfully started, so the conference is on and well underway.”

Eide added that, in addition to the two sessions, the guarantor powers are in direct contact “now, as we speak”, working to prepare the next phase.

The question of security and guarantees, he added, on which Greek Cypriots insist that third-country guarantees be terminated and troops removed from Cyprus, with Turkish Cypriots insisting on Turkish guarantees and troop presence post-solution, is being “looked upon through new eyes”.

“How can you combine these two?” he said.

“You cannot combine them just by reading aloud from the old script. Because we can do that for another 10 years and there will still be no settlement.”

There are four layers to the Cyprus security question, he added.

“Firstly, there is the need for having a settlement itself that ensures the political equality and the successful effective development of a federal solution – a strong, united Cyprus, in a bizonal, bicommunal federation, inspired by European principles.”

“Below that you have the level of internal security. You need a credible legal and police mechanism to take care of any kind of day-to-day incidents. Then, you need a level of implementation security, which means both sides need to know that they do not only have a good deal on paper, but it will actually be implemented. And fourthly, the issue of external security. Some kind of external help in providing protection for Cyprus against foreign traditional or non-traditional threats, like terrorism.”

On whether there is an end-by date attached to the talks, Eide said the window of opportunity is “not very long”.

“On the other hand, if we set a date and that date comes and we don’t have a settlement, everybody will say this has failed and think of alternatives which will be unpleasant to think about,” he said.

“But it’s open-ended in that we don’t have a specific end-date, but it’s not open-ended in the sense that we’re going to do this for many many months or years to come. Because then it will actually be over and I’m absolutely convinced that if this opportunity is gone, nobody knows when it will be recreated.”

Back to the future as Federer storms into Melbourne semis