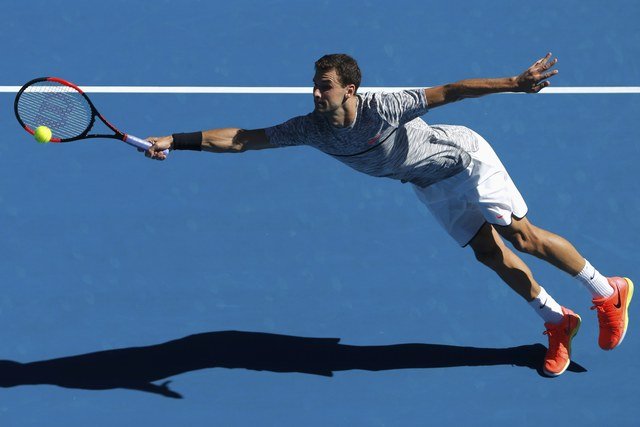 The 25-year-old Bulgarian, whose previous grand slam semi-final was at Wimbledon in 2014, will meet either Rafa Nadal or third seed Milos Raonic in the last four.

“In the first set it was absolutely nerve racking,” Dimitrov said. “I felt that I could play well but I was not striking the ball as well as I could and I was a bit passive. “With each game I was feeling a bit better and I was finding my groove. I’m just happy now.”

Dimitrov took the first after racing to a 3-0 lead as Goffin blew his opening service game with a double fault and two unforced errors, a pattern that was set for the match.

The baseline battle continued in the second set with both players breaking each other’s serve early, but the Bulgarian seized the advantage in the third game with a second break and then again in the seventh when he broke again.

Dimitrov, seeded 15th, wrapped up the second set with a forehand pass that swerved around Goffin at the net.

Dimitrov’s potent forehand got him out of trouble several times as he forced Goffin wide or left him with no shot after landing the ball right at the Belgian’s feet.

The Bulgarian failed to convert two match points on Goffin’s serve at 5-3 but raced through his next service game to seal the win with a backhand winner down the line after two hours, 12 minutes.

“I have been on a tremendous roller coaster,” Dimitrov said of the last two years, which saw him drop outside the top-40 after being in the top-10 in early 2015.

“But I am happy with the way things happened the way it did, otherwise I wouldn’t understand myself and I’m now appreciating things a lot better.

“To be in the semi-final of a slam means too much for me now.”