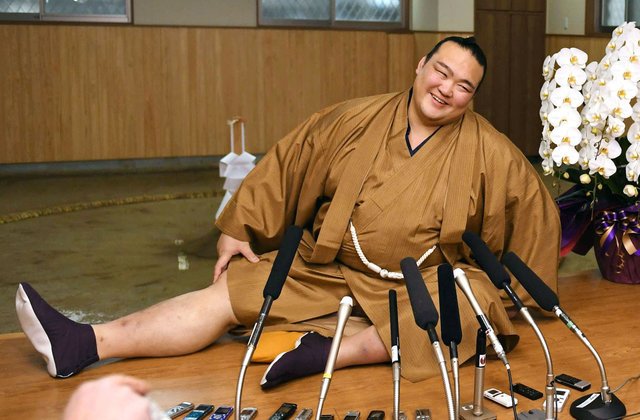 Kisenosato (top) was promoted to yokozuna, becoming the first native Japanese to attain the sport’s most exalted rank since 1998

Sumo, which features giant wrestlers clad only in loincloths, has seen such an influx of foreign grapplers over the last 50 years that prior to this week all three grand champions – known as yokozuna – were Mongolian. Hawaiian-born Americans have also held the rank.

Until January 2016 a homegrown rikishi, as the wrestlers are known, hadn’t even won a tournament championship for a decade.

But all this changed on Wednesday, when 30-year-old Kisenosato was promoted to yokozuna, becoming the first native Japanese to attain the sport’s most exalted rank since 1998.

“I will do everything in my power and try not to bring shame to the name yokozuna,” said Kisenosato, wearing a formal kimono and bowing deeply during a ceremony where he accepted the promotion from ozeki, sumo’s second-highest rank.

“I want to become even more focused,” he said after the ceremony. “I have grown as a person and want to be a yokozuna that is respected.”

But on Sunday, he wept after securing the ultimate rank with his first-ever tournament win in a bruising bout with long-dominant Mongolian-born yokozuna Hakuho.

Newspapers and television covered Kisenosato exhaustively, tracing his rise from rural Ibaragi, just north of Tokyo, to his promotion ceremony, which due to the huge interest was held at a hotel instead of the sumo “stable” where he lives and trains, as would be traditional.

“For a really long time we’ve only had foreign yokozuna, so now that finally, finally, we have one who’s Japanese – well, as a Japanese it makes me really happy,” said Rumiko Takahashi, 41, who lives in China and was back on a visit.

Even Japan’s staid deputy chief cabinet secretary got into the act.

“I believe many citizen have been waiting for the birth of a Japanese-born yokozuna for this truly Japanese traditional sport,” he told a news conference.

But sumo journalist Mark Buckton, who has been writing about the sport for two decades and called Kisenosato “the most consistent ozeki for a generation”, said there was more to the story.

“For long-term sumo fans it is about the boy who entered the sport as a mid-teen … and has always seemed to ‘choke’ when the title was within grasp, finally coming good,” he added.