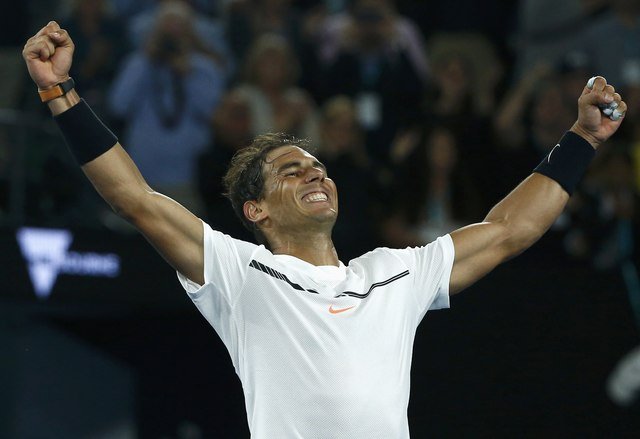 Standing in close to face a Milos Raonic serve might seem a recipe for self-harm but Rafa Nadal’s daring ploy helped him defuse the Canadian’s biggest weapon and book an Australian Open semi-final place on Wednesday.

The Spaniard broke the 26-year-old twice but was impenetrable on his own serve to close out a brilliant 6-4 7-6(7) 6-4 win and reach the last four at a grand slam for the first time since his 2014 French Open title.

Nadal will play 15th seed Grigor Dimitrov for a place in the final and a shot at a 15th major title.

A dream decider against Roger Federer beckons if the Swiss master can defeat compatriot Stan Wawrinka in the first semi-final on Thursday.

“If I am not playing aggressive, then I am dead,” warned Nadal prior to his match against Raonic, who defeated him in three sets at the Brisbane International.

Nadal hired Raonic’s former coach Carlos Moya who parted ways with the Canadian at the end of last season.

The 1998 French Open winner Moya was undoubtedly invaluable in preparing for Raonic, but Nadal took his own counsel under the lights at Rod Laver Arena.

He stood inside the baseline to cut off the Canadian’s angles, relying on his reactions to counter the serving assault.

“Yeah, I received inside the court,” ninth seed Nadal told reporters. “In Brisbane I was receiving like six, seven metres behind the baseline. I watched the match before, and I decided to go in.

“Talking with (coach) Toni (Nadal), with Carlos, we knew that we needed to change that. Before the match we were talking about trying to combine returning sometimes very close to the baseline and sometimes back.

“But the real thing is I felt good from inside, and I felt that I was putting some pressure on him. So I decided to stay in almost all the time, no? So happy for that.”

A nervous Raonic, watching his serving rockets being fired back at him, appeared rattled by the tactic early in the match.

After saving a break point in the fifth game, he dropped serve in the seventh and lost the opening set.

The third seed still fired 14 aces in the match but his trump card went missing when it was needed most.

Serving to stay in the match at 5-4, Raonic was broken to love as Nadal tied him in knots with passing shots when the Canadian rushed forward in desperation.

Nadal’s victory means three of the men’s semi-finalists are in their thirties, with 25-year-old Dimitrov the exception.

Thirty-year-old Nadal, who was pushed all the way in a five-set match against German teenager Alex Zverev in the third round, disagreed that it was getting easier for the old guard at the grand slams.

“It’s going to be tough to make that happen again,” he said.

“I think now there is really a new very good generation.

“Probably a few years ago things were a little bit different, but now there’s lots of good young kids.”

A tour of intense art

Nadal eliminated from ATP Finals, Alcaraz to finish year at No.1