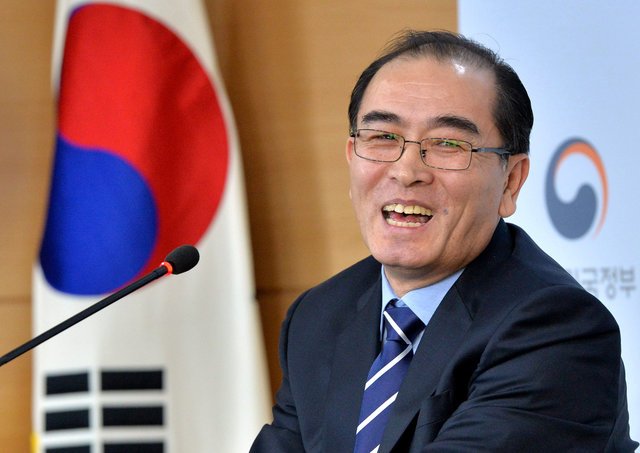 Thae Yong-ho, the former North Korean deputy ambassador to London, reacts during a news conference at the Government Complex in Seoul

The North Korean elite are outwardly expressing their discontent towards young leader Kim Jong Un and his government as more outside information trickles into the isolated country, North Korea’s former deputy ambassador to London said on Wednesday.

Thae Yong Ho defected to South Korea in August last year and since December 2016 has been speaking to media and appearing on variety television shows to discuss his defection to Seoul and his life as a North Korean envoy.

“When Kim Jong Un first came to power, I was hopeful that he would make reasonable and rational decisions to save North Korea from poverty, but I soon fell into despair watching him purging officials for no proper reasons,” Thae said during his first news conference with foreign media on Wednesday.

“Low-level dissent or criticism of the regime, until recently unthinkable, is becoming more frequent,” said Thae, who spoke in fluent, British-accented English.

“We have to spray gasoline on North Korea, and let the North Korean people set fire to it.”

Thae, 54, has said publicly that dissatisfaction with Kim Jong Un prompted him to flee his post. Two university-age sons living with him and his wife in London also defected with him.

North and South Korea are technically still at war because their 1950-53 conflict ended in a truce, not a peace treaty. The North, which is subject to UN sanctions over its nuclear and missile programmes, regularly threatens to destroy the South and its main ally, the United States.

Thae is the most senior official to have fled North Korea and entered public life in the South since the 1997 defection of Hwang Jang Yop, the brains behind the North’s governing ideology, “Juche”, which combines Marxism and extreme nationalism.

Today’s North Korean system had “nothing to do with true communism”, Thae said, adding that the elite, like himself, had watched with unease as countries like Cambodia, Vietnam and the former Soviet Union embraced economic and social reforms.

Thae has said that more North Korean diplomats are waiting in Europe to defect to South Korea.

North Korea still outwardly professes to maintain a Soviet-style command economy, but for years a thriving network of informal markets and person-to-person trading has become the main source of food and money for ordinary people.

“Kim Jong Chol has no interest in politics. He is only interested in music,” Thae said.

“He’s only interested in Eric Clapton. If he was a normal man, I’m sure he’d be a very good professional guitarist”.

Hundreds of Americans flown home from cruise ship, 14 with coronavirus