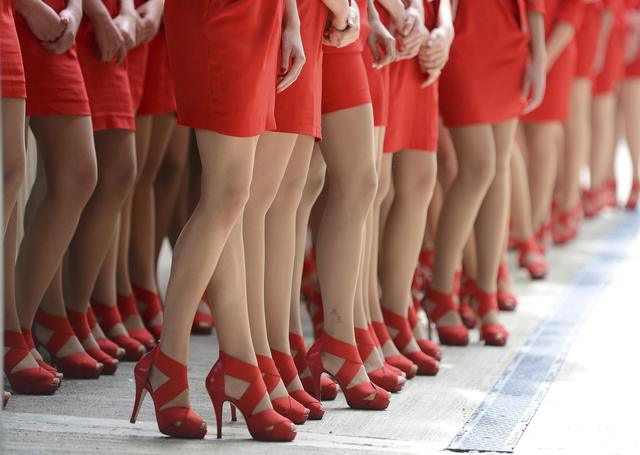 Those were some of the rules in a dress code imposed by a British recruitment agency on its female workers before one of them, Nicola Thorp, refused to wear high heels one morning and was sent home without pay.

After Thorp, 27, started a petition against compulsory high heels on parliament’s website that garnered 152,420 signatures, her rebellion became a national talking-point and led to an inquiry by lawmakers into workplace dress codes in Britain.

They reported on Wednesday that sexist dress codes were rife in some industries and women were routinely being forced to wear high heels in jobs where they were on their feet all day and their shoes were causing them pain and health problems.

“This may have started over a pair of high heels, but what it has revealed about discrimination in the UK workplace is vital,” said Thorp, commenting on the report.

Under Britain’s equality law, company dress codes must make equivalent requirements for women and men, but the lawmakers said breaches of the law were widespread in sectors including hotels, travel, temporary work agencies, hospitality and retail.

The report said women facing discriminatory dress codes tended to be young and in low-paid jobs with precarious contracts, making it difficult for them to challenge company practices.

It called on the government to take urgent action including raising financial penalties against employers found to be in breach of the law, and promotion of awareness campaigns targeted at companies, workers and students.

The lawmakers set up an online forum for one week in June last year, and 730 people came forward with stories.

While high heels were the most prominent issue, the lawmakers also heard from women who had been required by companies to dye their hair blonde or wear revealing outfits.

“I came in one morning and my manager was cracking down on uniform and informed me that I had to look ‘sexy’, which entailed wearing heels,” wrote one retail worker, who gave her name as Jasmine.

Jasmine complied, but her job involved standing and walking all day and she found high heels extremely painful.

“When I asked my manager if it would be OK if I changed to flats she replied saying ‘what girl can’t wear heels?’ and continued to tell me I was being pathetic,” she wrote.

Maronites applying to move to their villages in the north

Who could be potential Manchester United buyers?