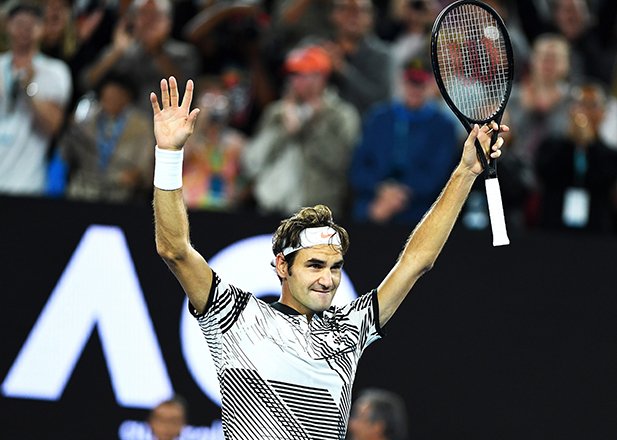 Roger Federer held firm against a furious fightback from fellow Swiss Stan Wawrinka, edging his former apprentice 7-5 6-3 1-6 4-6 6-3 in a Melbourne Park classic to reach the final of the Australian Open on Thursday.

On the day the Williams sisters booked their place in the women’s final, 35-year-old Federer continued the march of the veterans, becoming the oldest man to reach a grand slam final in more than 40 years.

The Swiss master was shaken as fourth seed Wawrinka stormed back to level the match at a floodlit Rod Laver Arena but it was his opponent who blinked first in the tension-riven decider.

Wawrinka double-faulted to hand Federer the key break in the sixth game and four-time champion Federer rode a wave of adulation from the terraces to serve out the match to love.

One win from an 18th grand slam title and a first in five years, Federer also kept alive the chance of a dream final with great rival Rafa Nadal, who plays the second semi-final against 15th seed Grigor Dimitrov.

The Swiss will become the oldest men’s grand slam finalist since Ken Rosewall featured in the US Open in 1974 at the age of 39.

“It’s all real, I never thought in my wildest dreams I would come this far in Australia,” a glowing Federer said in his courtside interview, having come to Australia with no expectations after six months out of the game.

“I’ve got a couple of days off. It’s beautiful.

“I’m happy we’ve had some epic battles over the years.”

Federer had to close out the win with an upper leg injury and thanked the court’s physio for his “magic hands”.

But he moved superbly to deny his close friend Wawrinka a chance at a fourth grand slam title.

Friendship was shelved before the match, however, and Wawrinka kept the doyen of men’s tennis waiting before they walked silently to centre court.

It was a slow-burning start to their seventh grand slam encounter, but it sparked into life in a marathon fourth game as Wawrinka saved a trio of break points to grimly hold serve.

There were moments of magic, a regal Federer drop shot sliced high into the air from the baseline just cleared the net to flummox Wawrinka at 3-2.

Federer swapped wands, grabbing a fresh racket after new balls were called and wielded it to devastating effect in the 12th game, breaking Wawrinka’s serve to take the set when he hammered a forehand into the net.

Broken again to trail 4-2, Wawrinka lost the second set in just 31 minutes and hammered his racket into the court.

The barrel-chested Swiss decided to complete the job properly, snapping his racket in half over his knee.

His other knee had been bothering him before the match and he returned to the court with it strapped.

With new racket in hand, he began swinging with abandon and his peerless backhand began to sing.

A searing passing shot broke Federer’s serve in the fourth game and Wawrinka roared through the set in a furious salvo of power hitting.

Wawrinka fired a string of huge serves to put the match on level terms and pounded his chest twice in a muted celebration.

Trading backhand blows like heavyweight boxers, the pair pounded away at each other in the fifth before Wawrinka’s serve crumbled.

The decisive double-fault sparked raucous cheers from the pro-Federer crowd and Federer roared to the finish, savouring the chance to add to his four Melbourne Park titles.

Ankara wants four freedoms for Turks after a solution

Semi-paralysed Limassol port to close on Friday ahead of takeover

Serena Williams to retire from tennis after US Open