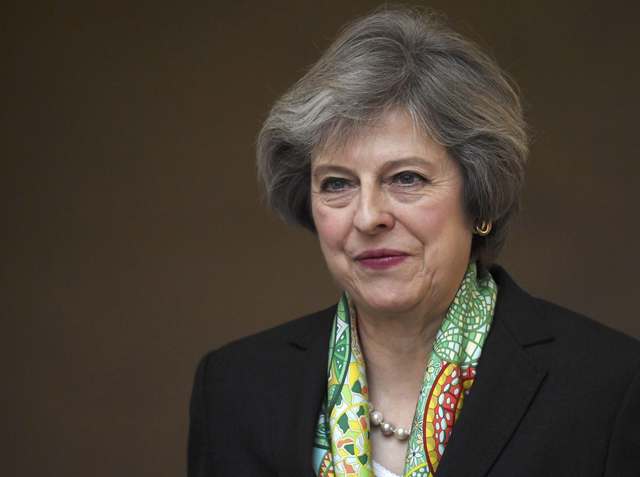 Britain's Prime Minister Theresa May leaves after giving a speech on mental health, in central London

Traveling to the United States on what will be the first meeting with a foreign leader since Trump was inaugurated last week, May sought to find similarities with the US leader when questioned by reporters, avoiding any possible policy conflicts.

Keen to win favor — and a trade deal — with the new US president to bolster her hand in divorce negotiations with the European Union, May said both countries shared many values and that contrary to his statements that Nato was “obsolete,” Trump had told her he was committed to the US-led military alliance.

But there may be sticking points in Friday’s talks – May said she condemned the use of torture and would stick to UK policy, suggesting Britain may not accept intelligence that could have come from such methods that Trump could reintroduce.

May’s visit to the United States is a boost to her message that Britain’s departure from the European Union will help her build a more “global Britain,” and her aides have underlined the depth of her government’s engagement with Trump.

“What’s going to be important is having the opportunity to actually sit down with President Trump and talk to him face to face, about the interests we share, about the special relationship, about the joint challenges we both face,” May told reporters on a government plane before landing in Philadelphia.

Pressed on whether Britain’s often cautious prime minister would get on with the “brash” U.S. president, May said: “Haven’t you ever noticed … sometimes opposites attract?”

Before meeting Trump at the White House, May will meet Republican members of Congress at a retreat in Philadelphia on Thursday where she will talk about shared values.

On the plane, May said she planned to raise security and defence, Syria, Russia and Nato with Trump, refusing to rule out discussions where the two leaders may not see eye-to-eye.

Asked about the possibility that Trump could bring back a CIA program for holding terrorism suspects in secret overseas prisons where interrogation techniques often condemned as torture were used, May said: “We condemn torture and my view on that won’t change – whether I’m talking to you or talking to the president.”

But she was more keen to concentrate on what Britain and the United States had in common, saying the two countries had “shared challenges, shared interests, that we can work together to deal with.”

May will have navigate the centre-ground carefully, wary of being criticised as too pro-Trump or alternatively as too negative toward a future trading partner.

She has threatened to walk away from the EU if she fails to get a good deal, and some critics say that could give other countries, like the United States, the upper hand in any talks.

And the EU might not take kindly to any overly friendly overtures to a president some of the bloc’s main leaders have voiced concern about.

Some kind of trade agreement, though, is high on her list of priorities, despite Britain and the United States being at odds over genetically modified organisms, meat production and public procurement and May unable to sign deals until after Brexit.

May says she will launch the divorce talks by the end of March by triggering Article 50 of the EU’s Lisbon Treaty, which gives up to two years to negotiate an exit deal. Only then can she agree with third countries.

Both leaders should use the time to find areas where they could remove trade barriers, May said.

“I think there is much that we can do in the interim in terms of looking at how we can remove some of the barriers to trade in a number of areas so that we are able to see an advantage for both of us even if we haven’t actually been able to sign that legal free trade agreement,” she said.

“We’re both very clear that we want a trade deal.”

‘Exceptional citizenships‘  being granted in the north

Even with new leader, Germany’s SPD will struggle to take power