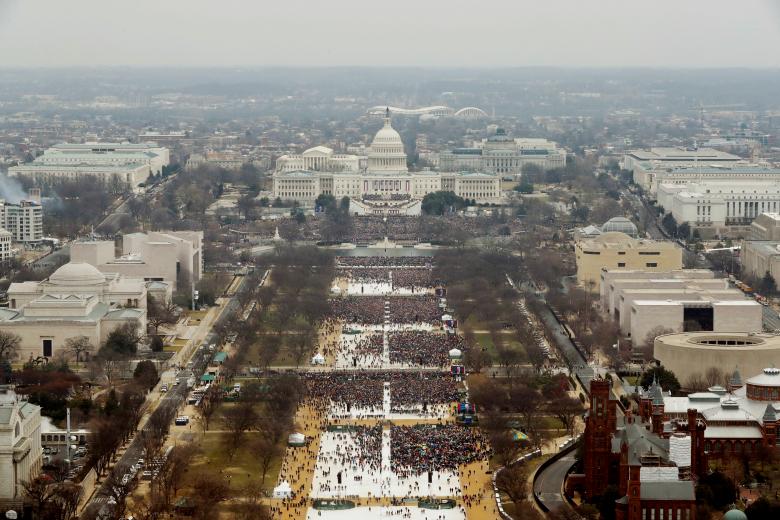 By the middle of the first full day of Donald Trump’s presidency, the Washington Post front-page story on his activities was refuting his claims of what the weather had been like less than 24 hours earlier.

It appeared an early taste of what looks set to be a uniquely toxic relationship between the president and the media that will serve neither party’s interests – and certainly not those of readers, viewers or American democracy.

As the work week got underway, the White House was doing a rather better job of painting itself as getting on with running the government. Many of its early moves – on the Trans-Pacific Partnership, women’s health, immigration, Obamacare – are deeply polarising. But they do at least look like a president and government trying to put their pledges into action.

The effects of the bizarre weekend row over attendance numbers at the inauguration, however, may well linger longer.

Thanks to verified photographs of the inauguration crowds and a host of other evidence, including pictures from social media and reports from Washington’s Metro system, we can be certain that turnout at Donald Trump’s inauguration was lower than either of Barack Obama’s.

Beyond that, though, both the Trump White House and – to a slightly lesser extent – the US and wider global news media are being both stupid and disingenuous in how they approached the battle.

It was bordering on insanity for Trump, his White House and press secretary to try and maintain the false claim that Trump’s inauguration had record turnout. It was also a mistake to make the issue one of the main points of the president’s news conference at Central Intelligence Agency headquarters.

During the campaign, such behaviour worked – indeed, by fighting with journalists so volubly, Trump won himself considerable free media coverage. As president, however, it plays terribly.

The irony is that if the Trump administration were not trying to deny reality it would be possible to have some sympathy for them. With the exception of Fox News and some other outlets long biased in a right-wing direction, much of the US media is liberal and clearly opposed to Trump. As such, they have not always treated him fairly.

Nor has the international press. Take this piece in the UK Independent on “the most awkward inauguration moment ever”. This turns out to be the moment on Friday when Melania Trump arrived with her husband for a church service with the Obamas. She was carrying a gift for the outgoing first couple – and Michelle Obama briefly looked unsure what to do with the item before it was handed off to one side. It’s not exactly “fake news”, but it’s hardly real news either.

The insinuation of much of the coverage of the inauguration turnout – particularly contrasting the figures so unfavourably with Obama’s inauguration – looked like a deliberate attempt to paint the presidency as less legitimate, with less widespread support.

Trump did get almost three million fewer votes than Hillary Clinton, but that shouldn’t have been the point here. Inexplicably, however, the president chose to make it relevant again on Monday at his first meeting with lawmakers by repeating a widely debunked claim that he would have won a popular vote majority were it not for millions of unauthorised immigrant voters. The result was another terrible headline.

There may not be such a thing as “alternative facts”, but there are – sometimes – alternative explanations. The main reason why more people turned up in Washington, DC for Obama’s administration than for Trump could actually be very simple. Washington, DC is packed with Democratic voters, many of them African-Americans for whom the election of the first black president was likely an enormous personal moment. Trump’s voter base might be equally enthralled by him, but many live further away.

As the president himself inevitably pointed out, the TV ratings for the inauguration were also very strong – indeed, stronger than for Obama in 2013, although not in 2009.

Many of the media outlets that made such a big deal about turnout at Trump’s inauguration did not make nearly so much noise when the number of people at Obama’s second swearing in fell almost by half. Through Obama’s tenure, the White House press corps quite rightly rebelled against some of the Democratic administration’s attempts to muzzle it, but they do themselves few favours by going to war so aggressively with Trump so quickly.

If the Trump administration is going to state outright falsehoods from the beginning, however, the press may simply have no choice.

There may, of course, be a strategy behind beginning the Trump administration with an attack on the media and even reality itself. One of the principles long used by both unpleasant governments and individuals over time is to try and assert their will by questioning people’s sense of reality and morality. If you can’t trust anyone, the thinking goes, then it becomes more difficult to question those in authority.

It has been a central part of Russian disinformation doctrine under President Vladimir Putin, spreading rumours often later proved false. One example last year was over the alleged abduction by asylum-seekers of a Russian-German girl in Germany. The incident, authorities and journalists later concluded, never happened.

There’s even a term for when it happens within intimate human relationships – “gaslighting”. It means to try and drive one’s partner mad – or at least, force them to question their sanity – in order to exert one’s will. (The phrase was popularised by the 1944 film Gaslight, in which a manipulative husband drives his wife mad by turning gaslighting in a house up and down – while denying doing so.)

Something similar may be going on here, but I doubt it. At the very least, the White House is simply making it look as though the incoming president cannot tolerate the idea of underperforming his predecessor in any way possible, even if it is perfectly inexplicable and ultimately meaningless.

The Trump administration deserves a fair hearing from all elements of the press, not least because it was elected as a consequence of very real concerns of a significant electorate. But this has not been a good way of starting.

Our View: Unions trying to stifle university, yet again