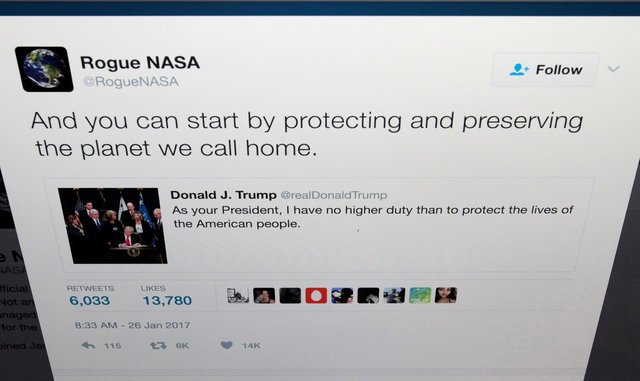 The Twitter account of Rogue NASA is seen replying to a tweet by U.S. President Donald Trump in a photo illustration in Toronto, Ontario, Canada January 26, 2017

Rogue Twitter feeds voicing employee concerns at more than a dozen US government agencies have been launched in defiance of what they say are President Donald Trump’s attempts to muzzle federal climate change research and other science.

Representing scientists at the Environmental Protection Agency, NASA and other bureaus, either directly or through friends and supporters, the accounts protest restrictions they view as censorship since Trump took office on January 20.

Seizing on Trump’s favourite mode of discourse, the feeds reflect concern that the new president, a climate change skeptic, is out to squelch federally backed research showing that emissions from fossil fuel combustion and other human activities are contributing to global warming.

“Can’t wait for President Trump to call us FAKE NEWS,” read one posting on the newly opened Twitter account @AltNatParkService. “You can take our official twitter, but you’ll never take our free time!”

Reuters could not verify that all the accounts, which borrow the names and logos of their respective agencies, were being run by current federal employees of those agencies. The alternate National Park Service Twitter feed said it had passed control of its account to individuals outside the government to protect colleagues at the agency.

The introductory disclaimer borne by the @RogueNASA account was typical of many of the feeds, describing it as “The unofficial ‘Resistance’ team of NASA. Not an official NASA account.” It beckoned readers to follow its feed “for science and climate news and facts. REAL NEWS, REAL FACTS.”

An administrator of an associated Rogue NASA Facebook page told Reuters the alternative site was being used as a platform by agency scientists and others who support them.

In some instances, the alternate Twitter accounts were registered on behalf of employees by supporters, presumably to better safeguard their anonymity, as was the case for the unofficial Rocky Mountain National Park site.

An individual contacted at the alternative Twitter feed for Mount Rainier National Park said: “It’s not about the people running the accounts. It’s about the movement it’s generated. We may never disclose our identity due to the current political ecosystem.”

The swift proliferation of such sites followed internal directives several agencies involved in environmental issues have received since Trump’s inauguration requiring them to curb their dissemination of information to the public.

Last week, Interior Department staff were told to stop posting on Twitter after an employee re-tweeted posts about relatively low attendance at Trump’s swearing-in, and about how material on climate change and civil rights had disappeared from the official White House website.

Employees at the EPA and the departments of Interior, Agriculture and Health and Human Services have since confirmed seeing notices from the new administration either instructing them to remove web pages or limit how they communicate to the public, including through social media.

The resistance movement gained steam on Tuesday when a series of climate change-related tweets were posted to the official Twitter account of Badlands National Park in South Dakota, administered under the Interior Department, but were soon deleted.

A Park Service official later said those tweets came from a former employee no longer authorized to use the official account and that the agency was being encouraged to use Twitter to post public safety and park information only, and to avoid national policy issues.

Within hours, unofficial resistance, or rogue, Twitter accounts began sprouting up, emblazoned with the logos of government agencies, the list growing to at least 14 such sites by Wednesday afternoon.

An account dubbed @ungaggedEPA invited followers to visit its feeds of “ungagged news, links, tips and conversation that the US Environmental Protection Agency is unable to tell you,” adding that it was “Not directly affiliated with @EPA.”

“Civil servants have a job to do and part of that job is to interpret the national parks and history behind it,” said a former official at the Interior Department, the parent agency of the National Park Service, who spoke on condition of anonymity. The former official said that while people outside the federal government could be involved in the rogue accounts, employees with whom the official communicated were supporting the feeds.

“They bristle at any political involvement,” the former official said. “They’re taking that as an attack on their work. You have 75l,000 people feeling attacked. You’re going to play whack-a-mole trying to stop them. I don’t see this stopping.”

The phenomenon was not limited to US environmental and natural resource employees. They were soon joined by similar alternative Twitter accounts for various science and health agencies, including the Food and Drug Administration, the National Institutes of Health, the Centres for Disease Control and Prevention and the National Weather Service. Many of their messages carried Twitter hashtags #resist or #resistance.

Tziortzis and InterTaxAudit together for the third year