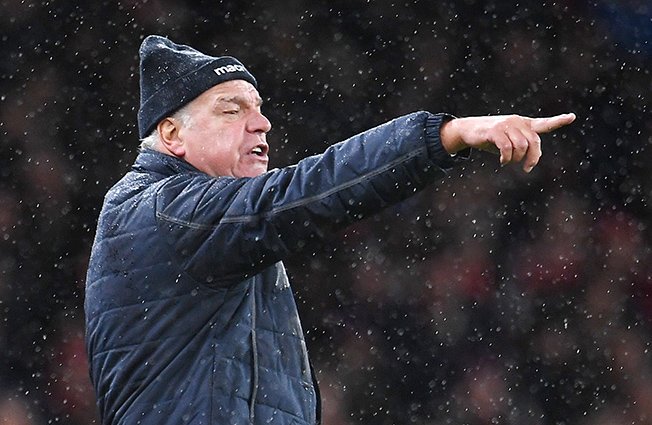 Sam Allardyce has failed to improve Crystal Palace’s fortunes since replacing Alan Pardew in December, with a tough home match against Pep Guardiola’s Citizens awaiting today in the fourth round of the FA Cup

Having written off the FA Cup as an unwelcome distraction prior to their third-round clash, Crystal Palace manager Sam Allardyce may now be hoping it provides a tonic to soothe frustrated fans and a pick-me-up for their beleaguered players.

Palace host Manchester City on Saturday (5pm) in one of two all-Premier League fourth round ties, with Arsenal’s match at Southampton (7.30pm) the other highlight of the weekend fixture list.

On paper, a City side who swept aside West Ham United 5-0 in the previous round are one of the last teams Allardyce would have wanted to face as he tries haul his side out of their current malaise.

Yet Pep Guardiola’s City have endured their own difficulties of late and a 4-0 league defeat to Everton at Goodison Park two weeks ago would have given Palace cause for optimism.

Should Palace lose, it will be their fifth defeat in eight matches since Allardyce replaced Alan Pardew in December. Victory, however, could give them a platform from which to build as they look to pull clear of the Premier League relegation zone.

There are signs that Allardyce is warming to the competition. He had said they were “concerned about bigger things than the FA Cup” before Palace played the manager’s former club Bolton Wanderers in the last round.

After they edged through following a 2-1 victory in a replay at Selhurst Park, however, Allardyce had seemingly mellowed. “Wins grow confidence,” he said. “No doubt about that.”

That win, however, was immediately followed by a 1-0 league defeat to Everton last Saturday, just as City were showing signs of recovery with a good display in a 2-2 draw with Tottenham Hotspur.

While Guardiola has not quite lived up to the impact City created when they won their first 10 matches after his arrival in the close season, there have been flashes of the brilliant football that the Catalan coach was able to produce at Barcelona and Bayern Munich.

In the last round, for example, Guardiola was handed the perfect introduction to the FA Cup as City fielded a strong team and swept aside West Ham 5-0.
The early rounds of the FA Cup are seemingly treated by some Premier League managers as an inconvenient interruption in the fixture list and little more than an exercise in squad rotation.

Arsenal manager Arsene Wenger is expected to ring the changes again when his side face Southampton with media reports saying striker Alexis Sanchez could be rested while Danny Welbeck is in contention to make his first start of the season.

Wenger, however, may be absent from the touchline after being charged with misconduct after appearing to push the fourth official during a Premier League match against Burnley on Sunday.

Liverpool, who were knocked out of the League Cup in the semi-final by Southampton on Wednesday, take on second tier Wolverhampton Wanderers on Saturday (2.30pm) when Premier League leaders Chelsea host Brentford (5pm).