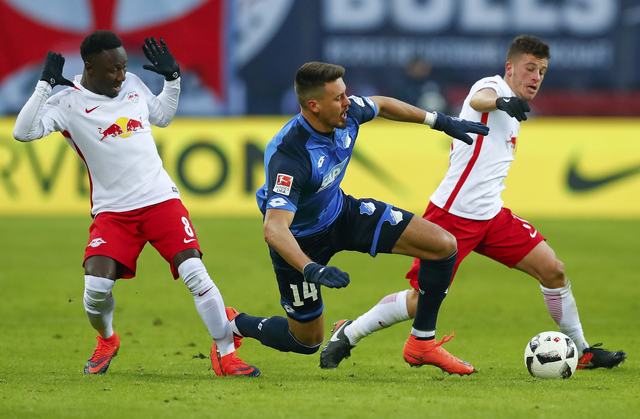 Bayern Munich edged past Werder Bremen 2-1 on Saturday for a Bundesliga record 13th consecutive win over them to stay three points clear at the top of the table.

Bayern, who face Arsenal in the Champions League knockout stage on Feb. 15, never hit top form but are now on 45 points with promoted RB Leipzig on 42 after they ended Hoffenheim’s unbeaten run this season with a 2-1 win.

Dutchman Arjen Robben drilled in after 30 minutes for Bayern following a spectacular run down the wing from Franck Ribery and David Alaba doubled their lead, perfectly curling a free kick over the wall and into the top corner on the stroke of halftime.

Max Kruse cut the deficit seven minutes after the restart, shaking off Alaba to fire in as the hosts looked more aggressive but Werder Bremen failed to find an equaliser and stayed in 15th spot, a point above the relegation playoff spot.

“There are always problems during a season and today it was difficult for us,” said Bayern coach Carlo Ancelotti. “But we deserved to win.

“We were playing well for about an hour but had problems after they scored their goal.”

Leipzig kept up the pursuit of Bayern, coming from a goal down to beat 10-man Hoffenheim.

Hoffenheim became the first visiting team to lead at Leipzig this season when Nadiem Amiri completed a sensational break and scored against the run of play in the 18th minute.

But 20-year-old Timo Werner struck for the fifth straight home game, tapping in after 38 minutes to level and take his tally to 11 league goals.

Hoffenheim’s top scorer Sandro Wagner, who like Werner is hoping for a Germany call-up, was sent off with a straight red card on the hour for kicking Stefan Ilsanker, with Germany coach Joachim Loew in the stands.

Leipzig made the extra man count and grabbed the winner with a deflected effort by Marcel Sabitzer in the 77th minute.

Borussia Moenchengladbach staged a scintillating comeback to beat hosts Bayer Leverkusen 3-2 after they trailed 2-0 at halftime and earn the first win for coach Dieter Hecking in his second game in charge.

Lars Stindl struck twice in six minutes early in the second half to cancel out goals by Jonathan Tah and Javier Hernandez before Raffael sprinted clear and slipped the ball under Bernd Leno for a win that lifted them five points clear of the relegation zone.

Cologne crushed bottom side Darmstadt 98 6-1 to move up to 29 points in seventh place, with Japan international Yuya Osako scoring twice.

Vfl Wolfsburg slumped to a 2-1 home loss against Augsburg despite leading through Mario Gomez. They dropped to 14th place on 19.

Man dies trying to climb down to apartment balcony from roof