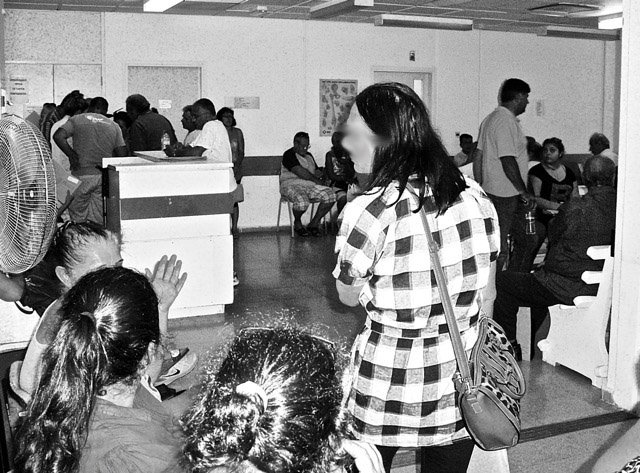 Waiting room at the orthopaedic department last summer.Little has changed

Last June the Sunday Mail ran an ‘Expat View’ column of mine concerning the horrendous queues at Paphos General Hospital, particularly in the orthopaedic clinic. An accompanying photograph showed a portion of the 60 people waiting to see Dr Mataxas – all of whom had the same appointment time. The wait ran to several hours, and in fact I was never seen that day. But some weeks later I was eventually seen by a clearly disturbed consultant who seemed at his wits’ end.

I had called on the medical director during my first wait, and had suggested he took a walk to see the situation for himself. His comment was that they just needed another doctor which would ease the current situation considerably. They now have this second doctor, but as of January 13 the position was exactly the same, with over 50 patents waiting and seemingly all given the same appointment time again.

I had also suggested to the medical director that the daily long, long queue at the initial registration counter could perhaps be eased by allotting one window for women with babies or toddlers, and another window for those seeking nothing more than repeat prescriptions. One can wait at registration for a couple of hours or more, and again, one wonders whether the medical director ever “walks the walk” in his hospital as well as “talking the talk”. I understand he is rarely seen outside his office.

The latest experience I encountered has been waiting for a CT scan. The wait wasn’t excessive, but it was interesting to observe that slightly anxious patients were told nothing on arrival and were simply fitted with a cannula and later invited into the scanner room with no idea of what the procedure is; how long it will take; what the scanner does; what the cannula is; and, indeed, whether there were any questions needing an answer?

Most patients, especially elderly ones, would be a little stressed and even unnerved by the state-of-the-art machine into which they were being asked to lie. It would cost no money, very, very little time, and no hassle gently to explain the procedure by one of the operators who, after all, do this work every day and for whom there is no mystery.

This said, along with many, many hundreds of expats, I and my wife have good reason to admire and be grateful and impressed by the high standard of medical treatment in Cyprus. Both public and the private hospitals have very well qualified doctors, and locally trained nurses who do their best in pressured situations to deliver their expertise. The standard of care is not the issue in Cyprus. It is the unconscionably low level of administration and apparent lack of organisational skills which stand out here, and the sad fact is that an improvement in this area would not involve a disproportionate measure of investment.

Just walking around the hospital(s) reveals the necessity for managements to look for ways to lessen the pressure points and the log jams at little or no cost whatsoever. There is an enormous waste of time involved when, for example, a given specialist, normally ready to see patients from Monday to Friday without an appointment, is for whatever reason not available. Can it be that difficult to place a handwritten notice on the registration window advising that “Today, Dr XYZ is unavailable”. Having waited a couple of hours to reach the registration window only to be given this information, doesn’t make for a happy and understanding public. . .

Hospitals, although a welcome sight for most of us with medical problems, are nevertheless an environment which worries almost anyone obliged to go to one, even if it is to visit a patient. They are places associated with overcrowding; difficulties with parking; with the uncertainties of life and death; with high tech procedures which are taken for granted by the staff, but which for patients are mostly unfathomable and sometimes quite frightening. All this must be remembered by hospital administrators and by all those for whom it is a workplace. When Cyprus gets its NHS up and running, I have to wonder quite what form it will take. I rather think there is a way to go.

People from the UK will have sorry stories to tell which could probably put their experiences in Cyprus in the shade, but Cyprus is a small community which ought to be easier to manage in terms of medical care and administration. We shall see.

As a tailpiece entirely unrelated to the above, but which is equally current in the public mind is the regular nonsense over fuel prices at the pump. Having worked for a number of years in the oil industry in Britain I well recall the rocket and feather effect of prices affected by the price of crude, and the situation which was exactly the same as we see here. The fuel companies are always ready with tales of woe and often quite spurious arguments for the swiftness (taking no account of stock held) with which pump prices rise along with crude oil costs, and the dilatory reactions when the crude price falls. The government here is no different from the UK government in addressing these fluctuations because of course they receive substantial revenue from the high percentage of tax which they receive from every gallon sold.

It is an utter and irresponsible scandal which governments should take and shake up until it is no longer a scandal and becomes altogether fairer for the consumer.

That dangerous CoLA beast is stirring once again