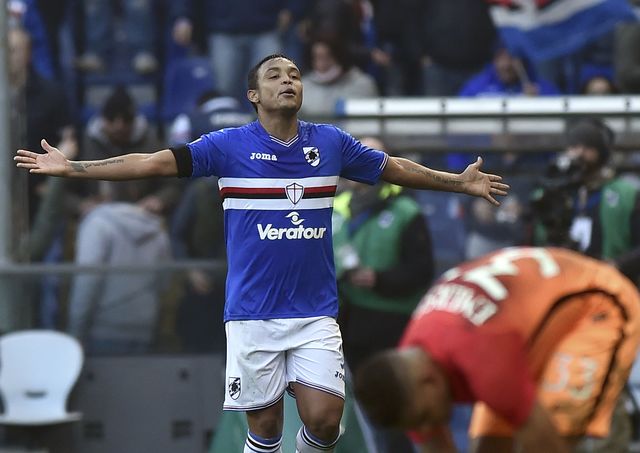 Gonzalo Higuain scored his eighth goal in the last six league games to inspire Serie A leaders Juventus to a 2-0 win at Sassuolo on Sunday while second-placed AS Roma lost 3-2 at Sampdoria.

Roma led twice before two goals in three minutes sent them to a defeat which left them four points behind Juve, who also have a game in hand.

Juventus, aiming for a sixth consecutive title, have 51 points from 21 games, with Roma on 47 from 22. Napoli (44) were at home to Palermo in the late game.

Higuain set Juventus on their way to a comfortable win by getting ahead of his marker to head in Alex Sandro’s cross after nine minutes, taking his tally for the season to fifteen.

The Argentine set up Juve’s second when he dispossessed Paolo Cannavaro and provided a low cross which was turned in by Sami Khedira after 25 minutes.

Edin Dzeko’s 66th minute goal appeared to put Roma on course for a win as they led 2-1 at Sampdoria but Patrik Schick levelled five minutes later with his first touch of the game, having come on as a substitute little more than a minute earlier.

There was more drama two minutes later when Luis Muriel scored the winner with a deflected free kick.

Bruno Peres had given Roma a fifth-minute lead but his goal was cancelled out by Dennis Praet before halftime.

Giovanni Simeone scored twice, the second a late penalty, as Genoa fought back from 2-0 and 3-2 behind to draw 3-3 at Fiorentina.

Josip Ilicic and Federico Chiesa had put Fiorentina 2-0 ahead but Genoa hit back with two goals in three minutes just before the hour, from Simeone and Oscar Hiljemark.

Nikola Kalinic put Fiorentina back in front almost immediately but the Violets blew it when Federico Bernardeschi handled on the line, was sent off and Simeone converted the penalty.

Diego Falcinelli’s hat-trick gave struggling Crotone a glimmer of hope with a 4-1 win over Empoli.

Crotone remain mired in the relegation zone but their win cut the gap between themselves and Empoli, the team immediately above the bottom three, to eight points.

Rodrigo de Paul gave Udinese a controversial 2-1 win over AC Milan, scoring the winner after having escaped a red card for a dangerous challenge on Mattia De Sciglio moments earlier.

De Sciglio was still receiving treatment when De Paul burst down the right and beat Gianluigu Donnarumma with an angled drive.

Hertha miss out on third spot after Freiburg defeat

Messi to return to PSG in early January