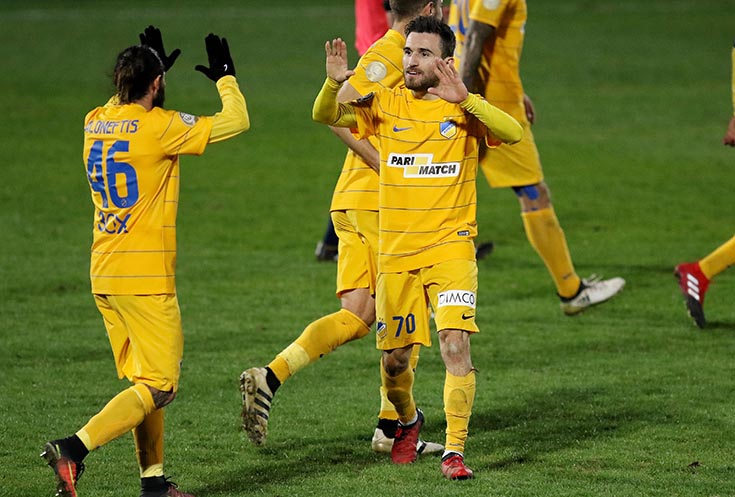 Apoel increased their lead at the top of the table to five points following their hard-fought win over Ethnikos Achnas and AEK’s unexpected home draw with last but one AEZ Zakakiou.

AEZ produced the upset of the weekend as they held high-flying AEK to a 1-1 draw, with the Larnaca team having dropped eight points (in four games) against opponents fighting for their first division survival.

AEK could have clinched a win had their strikers shown a bit more composure in front of goal. Acoran threw away opportunities to get a hat-trick inside the first 20 minutes, while Charalambides, Moisof and Triscovski were also guilty of failing to find the back of the net.

AEK could still have taken the three points right at the end but Ivan Triscovski could not beat AEZ’s rookie goalkeeper Ellinas Sofroniou from the penalty spot.

AEZ had taken the lead through Semedo in the first half, with AEK keeper Minio clearly at fault, allowing the ball to squeeze through his legs.

The equaliser came from a long-distance effort from Acoran four minutes from the end.

Despite resting their leading marksman, Pieros Sotiriou, and falling behind early on in the game Apoel proved too strong for Ethnikos Achnas, who had their top scorer Katcharava missing through injury.

Ethnikos took the lead through Hadjivassilis inside the first 15 minutes but Igor de Camargo equalised for visitors 10 minutes later.

Defender Astiz gave Apoel the lead with a rare goal in the 38th minute, while Gianniotas guaranteed the points in the 78th.

Ethnikos’ Pinceli managed to pull one back from the penalty spot with virtually the last kick of the game.

Karmiotissa secured three points against relegation threatened Doxa Katokopias, and halted their slide towards the relegation zone, a run that saw them go eight games without a league win.

All the goals came in the second half, with Andamavoic giving Karmiotissa the lead and Doxa’s Braulio equalising from the spot with just eight minutes remaining. However, the Limassol team pressed forward in the final minutes in search of the winner and were rewarded when Pasek scored from close range.

A goal by Maglica in the 17th minute was enough to give Apollon the win against bottom placed Anagennisi. Apollon missed a number of chances to increase their lead but were unable to do so and almost paid for their profligacy in the last minute as Rivas shot tamely at Apollon keeper Bruno Vale.

Omonia returned to winning ways with an easy 3-0 win over Nea Salamina, with Cillian Sheridan and Matt Derbyshire getting on the scoresheet with Salamina’s Fusco netting against his side.

In the final game of the weekend, Anorthosis continued their recent good run with a convincing 4-1 over Ermis Aradippou.

Goncalves, who played his last game for Anorthosis before departing for Scottish team Hearts, got a brace, with Victor and Chivou also putting their names on the scoresheet.

The consolation goal for Ermis was scored by Penga.

A host of stars criticised Trump at the SAG awards

Football teams could be charged for stadium damage caused by fans