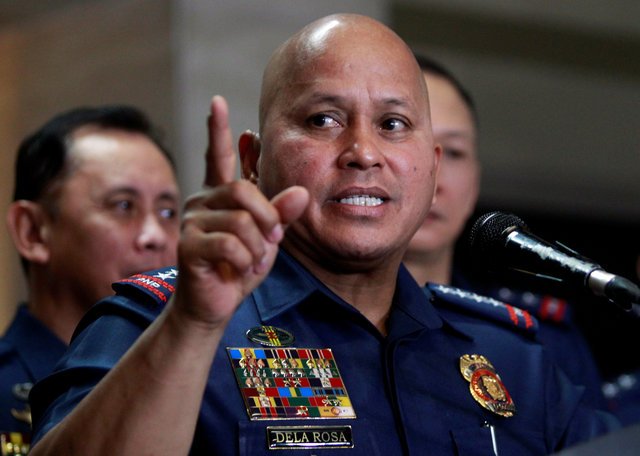 Philippine police have suspended controversial anti-narcotics operations until they can rid their ranks of “scalawags”, their chief said on Monday, following President Rodrigo Duterte’s admission the force was “corrupt to the core”.

Duterte, in a break from his steadfast support for the police, estimated 40 per cent of the force were corrupt and as “lousy as drug lords”, responding angrily late on Sunday to the kidnap and killing of a South Korean businessman by drug squad officers.

Duterte has been unwavering in his defence of police involved in the campaign against drugs in the face of international outrage over the death toll, and repeatedly said he would protect those accused of wrongdoing.

He has, however, frequently voiced frustration at police corruption.

Duterte made it clear the drugs war would continue until his presidency ends in 2022 and his police chief, Ronald dela Rosa, said he hoped operations could resume within a month.

“To all the rogue cops, beware! We no longer have a war on drugs. We now have a war on scalawags,” Dela Rosa told reporters after a flag-raising ceremony at the police headquarters where South Korean Jee Ick-joo, 53, was strangled in October.

“We will cleanse our ranks.”

New York-based Human Rights Watch dismissed the suspension of the anti-drug campaign as a public relations stunt, unless Duterte “seeks meaningful accountability” for the wave of drug-related killings unleashed after he took office seven months ago.

More than 7,000 people have since been killed, about 2,250 during police operations. The remainder are being investigated.

The drugs war has alarmed the West and rights groups accuse Duterte of tolerating a wave of extrajudicial killings by police. Police deny this, saying they have acted in self-defence.

While rights groups suspect many of killings being investigated have been police “hits”, police have attributed the deaths to vigilantism, narcotics turf wars and other violence not related to drugs.

“His wilful blind-eye to those deaths constitutes a disgraceful betrayal of the public trust,” Phelim Kline, the group’s deputy Asia director, said in a statement, referring to Duterte.

Kline said it was “a telling indicator of his personal contempt for rule of law and the right to life of his fellow citizens”.

Dela Rosa’s decision to suspend the drug crackdown came a day after he announced the dismantling of all anti-drugs units due to police abuses, including the planting of evidence.

The death of Jee was a disaster for the image of the police.

Jee was arrested for drug offences that his wife and lawyers said was an official cover for kidnap for ransom.

Senator Leila De Lime, Duterte’s most outspoken critic, said the president had a problem with “cognitive dissonance” and it was baffling that he could so strongly denounce police yet vow no let-up in the campaign.

“I continue to worry about the state of the president’s mental health,” she said in a statement.

“This latest incongruence between his factual assertion of a rotten police force on the one hand and his reliance on them to continue prosecuting his drug war as official government policy, has dire consequences.”

A host of stars criticised Trump at the SAG awards