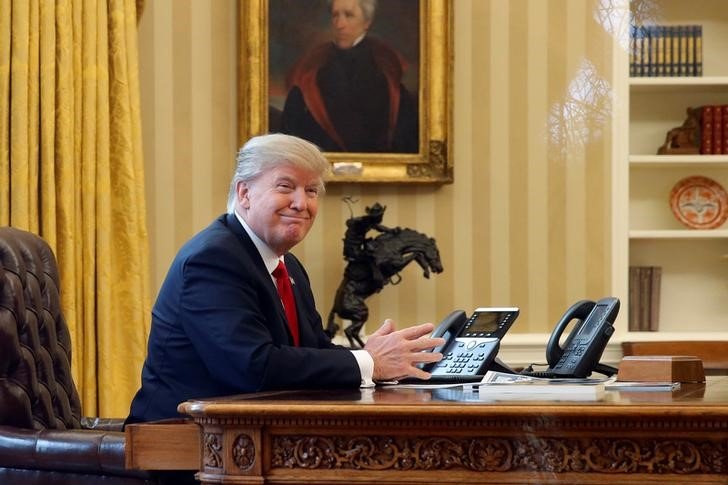 President Donald Trump on Monday brushed off outcry at home and abroad over an immigration ban on refugees and people from seven predominantly Muslim countries, a move that caused chaos at US airports over the weekend.

The leader of the Democrats in the US Senate, Chuck Schumer, said he would bring legislation to the chamber on Monday evening seeking to end the ban.

An executive order issued by Trump on Friday banned immigration from Iran, Iraq, Syria, Libya, Somalia, Sudan and Yemen, and temporarily halted the entry of refugees.

Chaos broke out at as border and customs officials struggled to put the directive into practice amid loud protests at major US airports.

The president’s critics have said his action unfairly singled out Muslims, violated US law and the Constitution, and defiled America’s historic reputation as hospitable to immigrants.

In a pair of Twitter posts early on Monday, Trump appeared to blame the airport confusion on protesters as well as Schumer, who had teared up over the weekend while discussing the ban, and even a computer system failure at Delta Airlines late Sunday.

“Only 109 people out of 325,000 were detained and held for questioning. Big problems at airports were caused by Delta computer outage … protesters and the tears of Senator Schumer. Secretary Kelly said that all is going well with very few problems. MAKE AMERICA SAFE AGAIN!” he wrote.

Schumer said 11 Republican lawmakers had already spoken out against the immigration order and called for action.

“We should repeal this, and then we should sit down in a careful, thoughtful way to figure out ways we need to tighten up things against terrorism,” the New York Democrat told NBC News.

He said he would also urge a delay in the vote in the Senate on Tillerson and likely other Cabinet-level nominees but the Senate Foreign Relations Committee said there was no plan to delay the vote.

The Trump administration on Sunday loosened a restriction on legal permanent residents of the United States, also known as green card holders, from the seven countries.

Administration officials had said on Saturday green card holders from those countries were included in the executive action and were required to undergo additional screening before re-entering the country.

Late on Sunday, the Department of Homeland Security said they would be admitted, subject to additional security checks if needed.

Senior Trump adviser Kellyanne Conway said the green card guidelines were not altered but needed clarification. “It wasn’t a rollback,” she told CNBC.

On Monday, a senior US official said all green card holders detained and questioned at ports of entry in the wake of the order were ultimately admitted to the United States on Sunday night. None were turned over to immigration authorities for detention, said the official, who asked not to be named.

Trump rejected criticism that the order amounted to a Muslim ban, saying more than 40 majority Muslim countries were not affected. But condemnation poured in from abroad, including from traditional allies of the United States like Germany.

Protests erupted around the country, lawsuits were filed and a federal judge blocked deportation of those detained under the order, which drew criticism from immigration and human rights activists, Democratic lawmakers and leading Republicans.

Senator Bob Corker, the Republican chairman of the US Senate Foreign Relations Committee and a Trump supporter, said the president’s order had been poorly implemented, particularly for green card holders.

“The administration should immediately make appropriate revisions, and it is my hope that following a thorough review and implementation of security enhancements that many of these programs will be improved and reinstated,” Corker said.