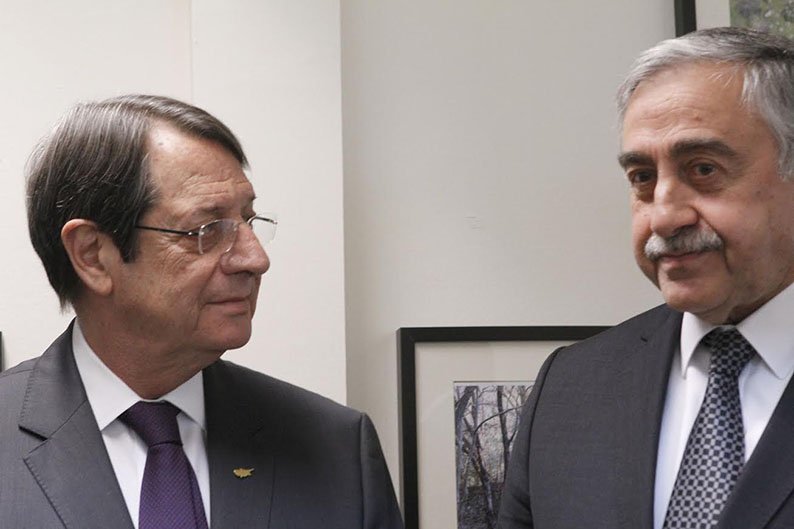 President Nicos Anastasiades and Turkish Cypriot leader Mustafa Akinci are aiming for a new Cyprus conference on security and guarantees in early March, the UN said on Wednesday after the leaders met in Nicosia.

According to a UN statement, the leaders took stock of developments since the Conference on Cyprus was convened in Geneva on January 12 and the subsequent session that was held at the level of deputies in Mont Pèlerin on January 18-19.

“They underscored their strong resolve and determination to maintain the current momentum,” the statement said, adding that the leaders decided on the way forward for the negotiations.

Anastasiades and Akinci have decided on to meet weekly throughout February to address outstanding issues while the negotiators will also continue their regular meetings. The next meeting will be on February 9.

The leaders also requested the United Nations to prepare, in consultation with the guarantor powers, for the continuation of the Conference on Cyprus at a political level in early March.

The January 12 Geneva conference, with the foreign ministers of Greece, Turkey and Britain, ended a day early after Greek Foreign Minister Nicos Kotzias called for a ten-day postponement and announced it publicly without consulting the other parties involved.

In the end a working group was set up for the following week in Mont Pelerin, also in Switzerland, which accomplished its work and reported back to their respective leaderships.

At the time, no new date had been fixed to try again for another political attempt between the two sides and the guarantor powers, and since then negative rhetoric has grown between Athens and Ankara.

The two countries have opposing views on whether Cyprus should have post-solution guarantees but animosity has also grown over the past week over the islet of Imia/Kardak with Athens accusing Ankara of provocations.

UN Special Adviser Espen Barth Eide alluded to this on Tuesday. For the UN and the leaders, Cyprus was the main issue but for Greece and Turkey, there were bigger ones that influence the way they think about the Cyprus issue as well, he said

Speaking on his return to the presidential palace on Wednesday, Anastasiades said the UN statement issued earlier in the day “which is both substantive and informative on the course that we will follow from now on”, had covered the basics and there was no need for him to elaborate further.

Asked by reporters whether he had discussed the latest Turkish stumbling block that the “four freedoms” granted by the EU – freedom of movement of goods, persons, services and capital – should be granted to Turkish nationals post-solution, Anastasiades said: “It was not discussed at all”.

When he was asked to comment about the kinds of negative statements coming out of Ankara of late,

Anastasiades said: “I raised this issue also during yesterday’s meeting (with the UNSG’s Special Adviser) and at today’s meeting”.

In any event Anastasiades said “the less said the better” if it would contribute to a positive climate.

Asked if he was worried by the tension between Greece and Turkey over the last few days, the president said: “It is a negative factor, but I want to hope that the problems will be overcome.”

The four freedoms element has added a new dimension to the talks and given the hardline parties additional fodder to oppose the peace process.

Turkey’s Vice President Tugrul Turkes said a week ago that Ankara wanted its citizens to enjoy the four freedoms in Cyprus after a solution, like Greek nationals. Ruling Disy’s response to this was that unlike Turkish nationals, Greeks were citizens of an EU state and could not be denied the four freedoms. It was nothing to do with Greece being ‘the motherland’.

The more hardline parties took the line that Anastasiades was too soft a negotiator and the more he was compromising in the talks, the more the Turkish side would push for more.

“Tolerance nourishes the promiscuity of the Turks,” the Greens said while the Citizens Alliance said one did not have to be an expert to figure out that within a short time two or three million Turks would either voluntarily, or strategically flood the island and “Greek Cypriots will sadly become a minority”. It was also a way for Turkey to enter the EU through the back door, the party said.

Meanwhile chief Greek Cypriot negotiator Andreas Mavroyiannis was in Brussels on Tuesday to conclude a series of meetings with European Commission President Jean Claude Juncker`s cabinet.
Chief commission spokesman Margaritis Schinas, confirmed that Mavroyiannis was in Brussels for a series of important meetings that included the head of the Juncker cabinet, Martin Selmayer and EC directorate general of legal affairs chief Louis Romero.

Reports in the Greek Cypriot press on Wednesday suggested he was there to discuss the Turkish demand for the four freedoms.