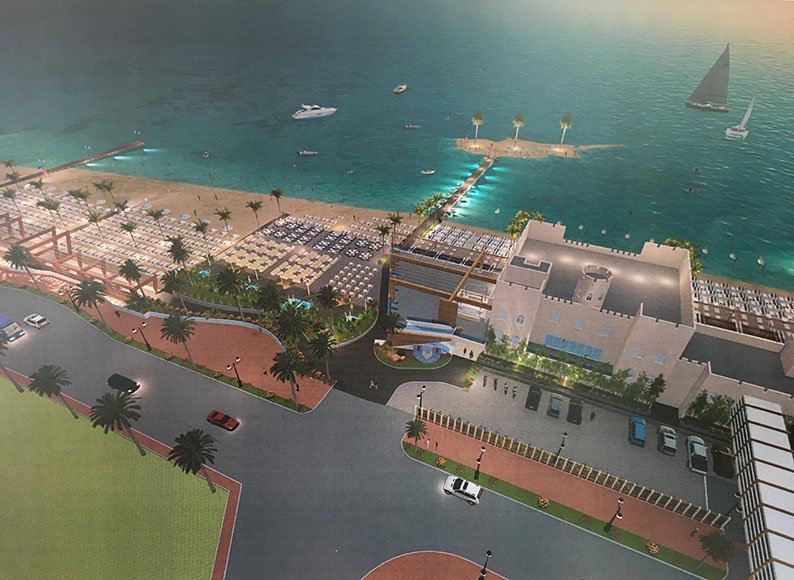 Artist's impression of the finished project

A huge seafood restaurant, the first phase of the luxury ‘Castle Project’ at Larnaca’s Mackenzie beach is expected to be completed in May.

The undertaking by Lebanese millionaire Antoine Saniour includes a luxury hotel with nearly 500 beds and 13 floors, a beach bar and a jacuzzi for 100 people while water sports and around 800 sunbeds and umbrellas will be on offer on the beach.

In the sea a small island in the shape of Cyprus will be constructed which is going to be connected to the beach by a path if the licence for that is issued. The sunbeds and umbrellas on the island will be available to the public.

“This is an investment that is not similar to anything in Cyprus. It is a unique development for Cyprus,” a member of the investor’s company told daily Politis.

The first phase includes the beach facilities and the restaurant which is going to have three floors and will have the capacity to serve 2,000 customers. The newspaper reported that the cost for this part of the project is around €7 million while building the hotel is estimated to cost €23 million.

The construction of the five-star hotel is scheduled to begin in 2018 and finish by 2021 if all goes according to plan.

Part of the new complex will be where the Ku De Ta restaurant and the old Castle hotel used to be, on land that has already been purchased by the Lebanese investor. The hotel on the other side of Tassos Mitsopoulos avenue will be connected to the restaurant with a bridge.

According to Politis construction has already began because the developer is confident that a building permit is going to be granted in the coming weeks.

Saniour’s company has run the luxury Rise hotel located in the centre of Larnaca since 2009. The three-star hotel is 100 metres from the Finikoudes promenade.