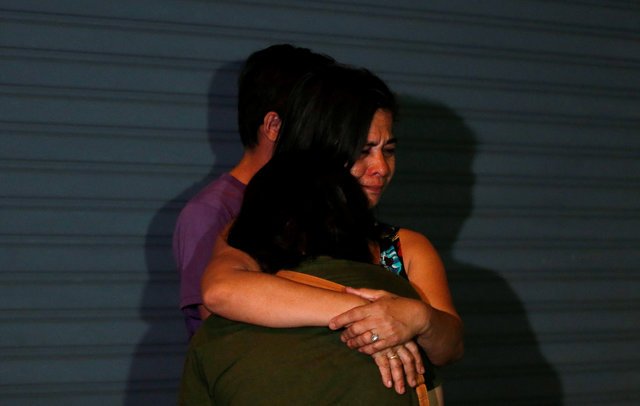 Family members cry near the body of man, who police said was a drug related vigilante killing in Pasig, Metro Manila

Police prosecuting the war on drugs in the Philippines have behaved like the criminal underworld they are supposed to be suppressing, taking payments for killings and delivering bodies to funeral homes, according to a report released on Wednesday.

Amnesty International’s report said the wave of drugs-related killings since President Rodrigo Duterte came to power in mid-2016 appeared to be “systematic, planned and organised” by authorities and could constitute crimes against humanity.

Responding to the findings, presidential spokesman Ernesto Abella defended the Philippine National Police (PNP), saying no extra-judicial killings were state-sponsored and investigations by Senate committees had proved that.

“There is no state-sponsored policy of extra-judicial deaths and that there is relentless effort on the part of the PNP to carry out the campaign properly and within legal processes,” he said.

In a series of reports last year, Reuters showed that the police had a 97-percent kill rate in their drug operations, the strongest proof yet that police were summarily shooting drug suspects.

The Reuters reports also found that low-level officials in poor neighbourhoods helped police assemble “watch lists” of alleged drug users and pushers that were effectively hit lists, with many of the people named ending up dead.

Duterte used exaggerated and flawed data, including the number of drug users in the Philippines, to justify his anti-narcotics crackdown, according to a Reuters investigation.

The release of Amnesty’s investigation, which was based on 59 killings in 20 cities and towns, comes amid uncertainty over the crackdown after the government suspended all anti-drug operations by police on Monday due to rampant corruption. The Philippine Drugs Enforcement Agency (PDEA) has now been given the lead role in the campaign.

Duterte made the decision after a security meeting on Sunday triggered by the kidnap and killing of a South Korean businessmen by drugs squad police. He said the incident, which took place at the national police headquarters, had embarrassed the country and tarnished the image of the police.

Amnesty said the vast majority of the killings it investigated “appear to have been extra-judicial killings – unlawful and deliberate killings carried out by government order or with its complicity or acquiescence”.

“The Duterte administration’s relentless pressure on the police to deliver results in anti-drug operations has helped encourage these abusive practices,” the report said.

A senior police officer told Amnesty that police are “paid by the encounter”, receiving the equivalent of at least $160 per killing and received nothing for making arrests.

Amnesty reported that some police are rewarded by undertakers for sending dead bodies their way, police steal from victims’ homes, and paid killers are on the police payroll.

“The police are behaving like the criminal underworld that they are supposed to be enforcing the law against, by carrying out extrajudicial executions disguised as unknown killers and ‘contracting out’ killings,” it said.

The government has denied sponsoring extra-judicial killings, or police collaboration with assassins.

Amnesty’s report included numerous references to the series of Reuters stories and investigations into the war on drugs in the Philippines.

Amnesty reported similar findings. The report said that police accounts of shootouts and deaths during operations were “startlingly similar”, and often far different to witness testimony and witness accounts of victims being shot dead despite having shouted that they would surrender.

The investigation by Amnesty, a London-based advocacy group, was carried out mainly in November and December and was based on interviews with 110 people.

Latest police data shows 7,669 people have been killed since Duterte unleashed his war on drugs seven months ago, 2,555 in police operations, which the police says were all in self-defence.

The other deaths are classified as investigated, or under investigation. Human rights groups believe most of those are drugs-related, carried out by vigilantes or hit men.

The PNP said in a statement it took “strong exception to the opinions raised” in the Amnesty report, adding the force had “always observed and upheld respect for human rights as a fundamental principle in policing”.

“The police cannot help being typecast as alleged violators of human rights partly because of the basic nature of its law enforcement function,” it said.

Life goes on for ‘disappointed’ Bolt after losing gold