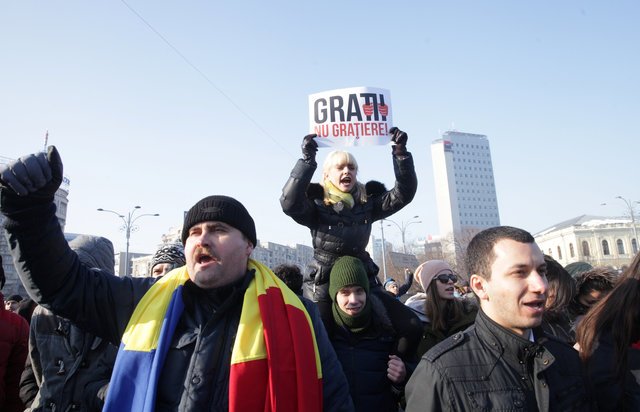 A woman holds a sign reading "Bars, not pardon" during a protest in Bucharest

Romania’s top judicial watchdog announced a court challenge on Wednesday to a government decree decriminalising some graft offences in what critics say is the biggest retreat on reforms since the country joined the European Union a decade ago.

The decree, unveiled by the Social Democrat-led government of Prime Minister Sorin Grindeanu after it took power earlier this month, has drawn sharp criticism and triggered the biggest street protests since the fall of communism in Romania in 1989.

More than 10,000 people took to the cold streets outside government headquarters in the capital, Bucharest, late on Tuesday after the government pushed through the move in a hastily-assembled cabinet session.

Protesters gathered again on Wednesday, shouting “Rats!” Numbers were expected to grow in the evening.

If enforced, the decree would, among other things, decriminalise abuse-of-power offences in which the sums involved were less than 200,000 lei ($48,000).

That would put an end to an ongoing trial of Social Democrat party leader Liviu Dragnea, accused of using his political influence to secure state salaries for two people working at his party headquarters between 2006 and 2013. Dozens of lawmakers and mayors across all parties stand to benefit from the decree.

“I don’t understand what protesters are upset about,” Dragnea told reporters on Tuesday.

Two opposition parties, the opposition Liberals (PNL) and the Save Romania Union (USR), announced they would file a no-confidence motion on Wednesday against the government, which enjoys a comfortable majority in parliament.

As parliament opened for its first regular session of the year, USR lawmakers paraded banners that read “Shame” while other opposition deputies shouted “Resignation” and “Thieves”.

The Romanian leu fell 1.4 percent against the euro to 4.5540, marking a seven-month low, while longer-term yields rose 14 basis points.

Romania’s Social Democrats won back power in a December 2016 election a year after protesters drove them from office in an outpouring of anger over a deadly fire at a nightclub that lacked emergency exits and safety permits.

Many saw the fire as emblematic of widespread corruption and impunity, but after 12 months of technocrat government, the Social Democrats returned on a promise to hike wages and pensions and cut taxes.

“The problem is that one cannot act the way the government did in a country with the rule of law, which Romania is and wants to remain.”

CSM president Mariana Ghena said she would file a challenge to the decree with the constitutional court by the end of the day.

The European Commission has Romania’s justice system under special monitoring.

“The fight against corruption needs to be advanced, not undone,” Commission head Jean-Claude Juncker and his deputy, Frans Timmermans, said in a joint statement. “We are following the latest developments in Romania with great concern.”

The decree would apply to ongoing investigations and trials as well as new cases and come into effect within 10 days. Criminal negligence would no longer be an offence and the definition of conflict of interest would be narrowed.