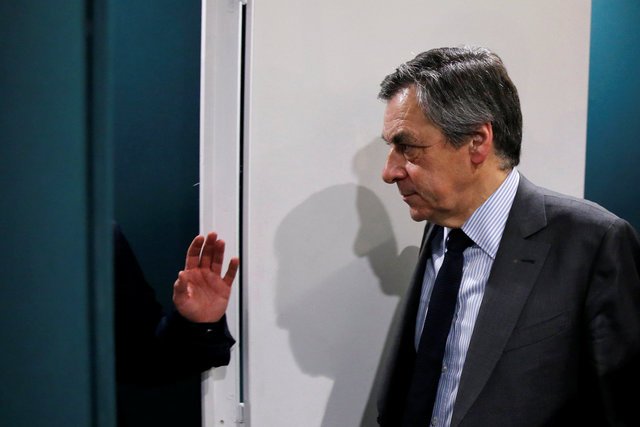 Pressure on French presidential candidate Francois Fillon to quit the race mounted on Thursday as some lawmakers in his own camp urged him to drop his scandal-tainted bid in order to save the conservatives from defeat.

With opinion polls showing the conservatives that their candidate may be fatally damaged, some senior members of The Republicans urged him to pull out now to give the party time to find a good replacement.

Fillon, 62, denied wrongdoing after Le Canard Enchaine newspaper reported the former prime minister had paid his wife hundreds of thousands of euros for work she may not have done.

France 2 television said it would broadcast later on Thursday extracts of a 2007 interview ofFillon‘s Welsh-born wife Penelope telling British media that she had never worked as his assistant.

French financial investigators are also widening their probe to include two of the Fillons’ children, a source told Reuters.

Fillon himself pressed on with campaigning in the Ardennes region in northern France, telling journalists that he would concentrate on “questions which are of interest to France”.

“I feel like someone who is being attacked unjustly on all sides. But I am ready to defend myself,” he said when a few cries of “Resign!” rang out from a crowd.

French lawmakers are allowed to employ family members, but the suggestion Penelope Fillondid no real work has damaged Fillon‘s image, and could yet put him in court.

Fillon has said the work was genuine and will not stand down unless put under formal investigation. He held an emergency meeting with party grandees on Wednesday in which he urged them to stick by him for another two weeks – the time he estimated a preliminary investigation would take to run its course.

But some appeared unwilling to give him that much time after one poll showed the hitherto favourite would be eliminated in the first round of the election on April 23.

Another survey showed 69 per cent of people wanted Fillon to drop his bid.

“We need to change tactics, strategy,” lawmaker Georges Fenech told RTL radio on Thursday. “We’re like the orchestra on the Titanic as it sinks,” he said in an earlier comment.

Another legislator, Philippe Gosselin, called on former prime minister Alain Juppe, whom Fillonbeat in a runoff for the party nomination, to think of stepping in as an alternative.

Aside from Juppe, other names being mentioned are Francois Baroin, a former finance minister, Valerie Pecresse, who heads the prosperous Ile de France region around Paris, and Xavier Bertrand who won a notable victory against Le Pen in regional elections in 2015.

The scandal has heightened investor concerns that National Front leader Le Pen could win and take France out of the euro and the European Union.

Opinion polls routinely show Le Pen making it through to a second round, but being soundly defeated in the runoff vote by any candidate – be it Fillon or the centrist Macron.

The uncertainty has increased state borrowing costs, with the spread over German bond yields rising to an almost two-year high.

France sold 7 billion euros’ worth of bonds in an auction on Thursday at yields about 30 basis points higher than at sales in December and January.

EU body in Cyprus to evaluate treatment of detainees