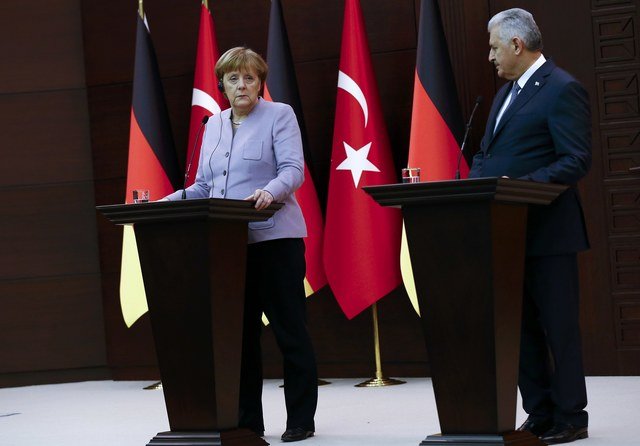 A day after the two leaders said they were aiming for a new conference on Cyprus in early March, international players including Ankara, Athens, Moscow and Berlin began weighing in with German Chancellor Angela Merkel calling for a speeding up of the negotiations.

“The process on Cyprus must be speeded up and there should be an outcome,” Merkel said during a joint news conference in Ankara with Turkish Prime Minister Binali Yildirim.

“For Greece, Cyprus, Turkey and the entire EU, this is an important issue,” she added.

The German leader arrived in the Turkish capital on Thursday for talks with Turkish officials.

For his part, Yildirim said reaching a settlement on Cyprus was Turkey’s “greatest desire.”

“We support a united Cyprus, a just Cyprus, with the two federal administrations, a solution as desired by Europe as well as by Turkey and Greece,” he noted.

“On this matter, the sides must be careful and patient, and mutual sacrifices, rather than unilateral sacrifices, are needed,” Yildirim added.

Back in Cyprus, Russian ambassador Stanislav Osadchiy said his government was ready to participate in a new summit on Cyprus.

Osadchiy noted that a new Cyprus conference would be better with the participation of UN Security Council members.

Speaking on the sidelines of a visit to Limassol municipality, the ambassador reiterated his country’s desire for a settlement of the problem as soon as possible.

“We want a solution, we want all differences settled as soon as possible,” he said.

Osadchiy added that a new Cyprus conference would be better with the participation of UN Security Council members.

“It would be useful, and if necessary we are ready to go,” he said.

Meanwhile President Nicos Anastasiades and Greek Prime Minister Alexis Tsipras will be having consultations, on a political level, in either Nicosia or Athens but definitely before a new conference on Cyprus, according to CNA sources.

Well-informed diplomatic sources said that most probably the Greek Premier will visit Cyprus and both sides are in consultation to finalise the date.

The same sources said there were different issues which the two sides need to discuss at a high level which concern the continuation of the conference on Cyprus, namely Turkey`s demand for its citizens to enjoy the four fundamental freedoms in Cyprus after a solution like Greek nationals. The two sides will also discuss Greco-Turkish relations and Turkey-EU customs union.

CNA has learned that during discussions, the two sides talked about the Turkish demand for the four freedoms, how Turkey is trying to associate this issue with security and guarantees in Cyprus and how Athens and Nicosia, together with the EU, are handling it.

The same sources said that based on Cyprus’ negotiator Andreas Mavroyiannis’ contacts in Brussels, community officials understand that this is an issue which concerns the EU in its entirety.

Currently, they noted, efforts are underway to start the dialogue that will upgrade Turkey`s custom union with the EU and spokesman Christodoulides discussed this issue with Katrougkalos.

Meantime the UN said it had yet to decide whether UN Secretary-General Antonio Guterres will be attending the next summit on Cyprus, slated for early March.

Speaking to the press, UN spokesman Stephane Dujarric said he was not in a position to provide more details at this time.

The presence or not of the UN chief would be decided at a later date, he offered.

The two discussed the Cyprus problem, energy and bilateral relations, according to a tweet by deputy government spokesman Viktoras Papadopoulos.

Anastasiades is currently in Malta attending an informal summit of European leaders.

Trump’s visa ban isn’t as new as you think

Turkey to reinforce military presence in the north – Erdogan

Drug squad find 43g of cannabis in the mail