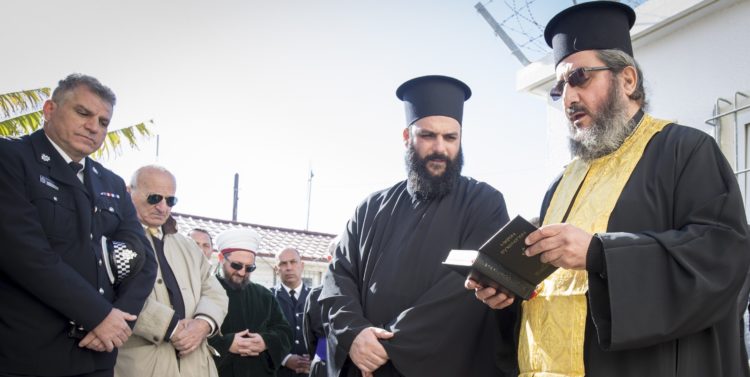 The British bases announced on Thursday the opening of two multi-faith prayer rooms on the grounds of the sovereign base area (SBA) prison of Dhekelia.

“Religious leaders from the Greek and Turkish Cypriot communities gathered at Her Majesty’s Prison Dhekelia on Wednesday at the official opening of two multi-faith prayer rooms on its grounds,” a statement said.

The bases said the two purpose-built rooms, a church and mosque, would provide prisoners with a much-needed place of worship throughout their incarceration.

Bases officials had been working on opening the prayer rooms for a number of years and the completion brought to an end a project that was long overdue, according bases administrator, Air Vice Marshal Mike Wigston.

“Today is the culmination of a lot of work by the SBA Administration, prison staff, religious leaders from the Greek and Turkish Cypriot communities, as well as from within the British Bases community too,” Wigston said, expressing his delight in the project being finally completed during speech at the opening.

“We have listened to Her Majesty’s Inspectorate for Prisons and this is a critical facility which provides two different places of worship for both Christians and Muslims.”

“Prisoners from all faiths are now able to use these rooms to find a place of peace, worship and reflection and I would like to thank all those who have made donations of icons, prayer mats and the Quran to be placed inside,” the Air Vice Marshal told the leaders from both the Christian and Muslim faith and numerous members of the Greek and Turkish Cypriot communities who gathered for the event.

During the ceremony, Greek Orthodox father Kyriakos Panayiotou blessed the church facility while mufti Samir Alemdar did the same for its Islamic counterpart.

After the blessing, the mufti paid tribute to the administration for opening the two facilities calling the move an “important humanitarian step forwards,” and thanking them for allowing people of all religions to worship, “which is so important to humanity.”

“There is only one creator, regardless of what we may call him, we are all descendants from Adam and Eve and we should be able to worship, whether that be in a church or in prison,” Alemdar said adding he was happy that the administration had allowed for the facilities to be built and saying he was always available should anything else be required to furnish the rooms.

Dhekelia Divisional Commander Jim Guy also spoke at the ceremony, explaining why the multi-faith prayer rooms were more important now than ever.

“The type of prisoners we have in the prison has changed dramatically over the years and to date, we have had 22 different nationalities housed inside at some point, which makes the opening of these rooms even more necessary.”

The prison has the capacity to accommodate up to 13 prisoners at a time including women, following the opening of a female wing in 2015.