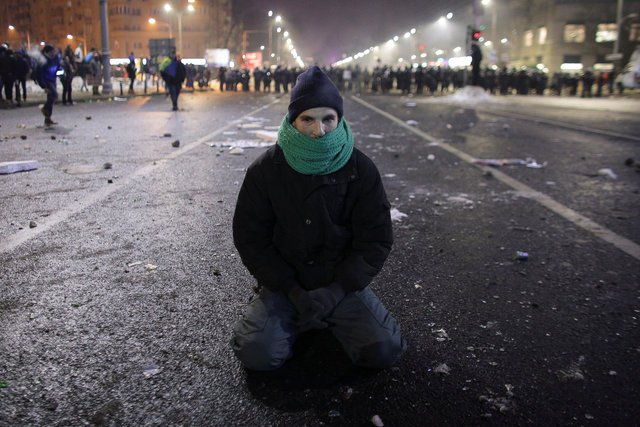 A Romanian cabinet minister resigned on Thursday, testing the stability of the month-old leftist-led government after 250,000 people came out in protest over a decree that could effectively amnesty dozens of officials accused of corruption.

The government order, hastily adopted late on Tuesday, has triggered the biggest nationwide protests since the fall of communism in 1989.

Critics say decriminalising a number of graft offences marks the most significant retreat on anti-corruption reforms since Romania joined the European Union in 2007.

Florin Jianu, Romania‘s minister of business, trade and entrepreneurship, announced via Facebook that he was resigning.

It is the “ethical thing to do,” he said, “not for my professional honesty, my conscience is clean on that front, but for my child”.

Prime Minister Sorin Grindeanu has shown no sign of giving ground, but a vice-president of the ruling Social Democrat Party (PSD), Mihai Chirica, urged the government on Thursday to withdraw the decree.

President Klaus Iohannis, a former leader of the opposition centre-right Liberal Party, followedRomania‘s top judicial watchdog in filing a legal challenge to the decree with the Constitutional Court. The court has yet to say when it will consider the challenge.

The decree is due to take effect in a little over one week. The government says the order, and a draft bill on jail pardons, are needed to ease prison over-crowding and bring the criminal code into line with recent constitutional court rulings.

Critics said it is tailor-made to benefit dozens of public officials under investigation or on trial for corruption, including PSD leader Liviu Dragnea. The government denies this.

Anti-corruption prosecutors, currently investigating more than 2,000 abuse-of-power cases, said on Thursday they had received a complaint about how the decree was drafted and were investigating.

The Social Democrats were driven from power by protests in late 2015 after a nightclub fire killed 64 people and triggered widespread anger over corruption and impunity when it emerged the venue lacked emergency exits and safety permits.

They regained power in a December election on promises to raise wages and pensions.

On Wednesday, Prime Minister Grindeanu wrote to the head of the European Commission, Jean-Claude Juncker, detailing the reasons why his cabinet chose to pass the decree.

Juncker said he was watching the developments with “great concern”, warning that the fight against corruption in Romania “needs to be advanced, not undone”.

Six Western states including Germany and the United States have also criticised the government.

“The Social Democrats are testing how far they can go,” anti-corruption legal expert Laura Stefan said.

“If we accept they can approve emergency decrees untransparently, then tomorrow they will adopt others and so on. We will wake up without institutions overnight.”