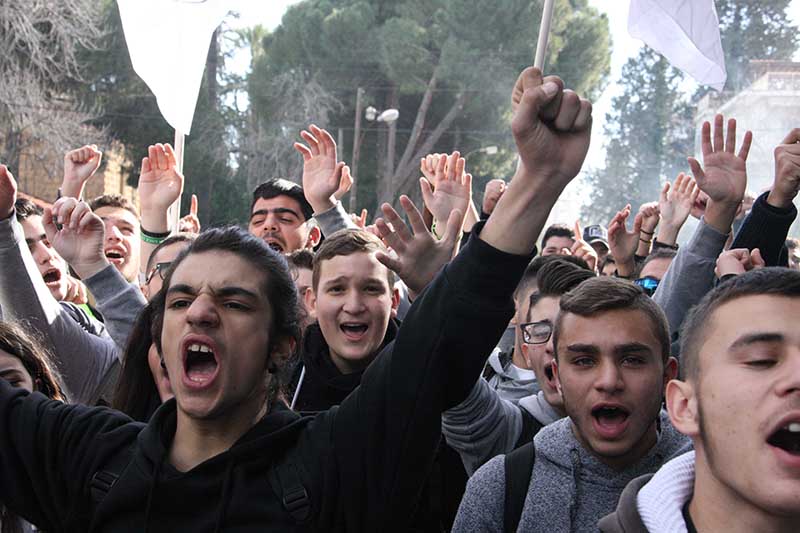 Students protesting against the move in January outside the House

Students Thursday decided to go ahead with a planned classroom stoppage despite the withdrawal of support by parents, students’ union Psem said.

According to Psem president Zafiris Dimitrios, students will not go to class from 9.25am until 1.35pm to send a resounding message in over a bill due to be passed by the House on Friday.

This despite the suspension of measures of by the Pancyprian Confederation of Parents announced earlier by its leader Petros Koulermou.

The confederation of secondary school parents also announced the suspension of measures late on Wednesday. They had originally called for students to not attend third and fourth periods (from 9.45am) on Thursday.

The Pancyprian Confederation said it still considered it necessary for the House to postpone the vote to introduce exams twice a year for a reasonable period to allow time for dialogue that will enable the proper implementation of the proposal.

The new regulations on secondary education include the introduction of exams at the end of each semester. Parents and students oppose the measure, saying it would turn schools into nothing more than exam centres. Students say it would put additional stress on their shoulders and would force them to take even more afternoon classes.

The education ministry has so far rejected pleas for further negotiations with stakeholders, arguing that an exhaustive six-month dialogue had already taken place. Minister Costas Kadis had said that the proposed regulations were based on scientific evidence and their aim was to provide students with the best education and upgrade the educational system.

Get physical this weekend