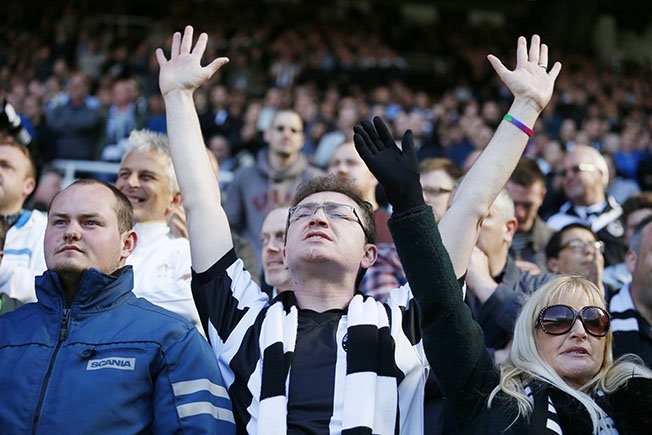 Of the 24 Championship clubs, 15 have competed in European football, and the best-supported of them, Newcastle United, are attracting more than 51,000 to home games

The emergence of a new generation of football fans has put English football on its way to a record-breaking season.

Across all four divisions – Premier League, Championship and Leagues One and Two – the average crowd is on course to exceed 15,000 for the first time in more than 50 years.

The biggest rise is in the second tier, the Championship, where crowds are at their highest level since 1954, partly because so many ‘big’ clubs are in the division this season.

Another factor, say club officials, is the number of children being attracted to their local clubs rather than supporting a glamorous Premier League team.

Of the 24 Championship clubs, 15 have competed in European football, and the best-supported of them, Newcastle United, are attracting more than 51,000 to home games.

Football League crowds have never been so high since the Premier League started in 1992. Even without Newcastle’s remarkable support, Championship crowds are significantly higher than last season. The latest figure from the League is 19,876 in the Championship, up 13 percent on last season.

Leagues One and Two are also heading for an increase on last season.

“We have created a new generation of football supporters,” said Paul Barber, a director of the English Football League (EFL) and chief executive of Brighton & Hove Albion, one of the favourites for promotion to the Premier League – in which they have never played.

Barber, who had senior roles at the Football Association, Tottenham Hotspur and Vancouver Whitecaps before taking charge at Brighton, said: “The way fans are treated now is better than ever – the way clubs respond to them, engage with them. The number of under-18s watching is rapidly growing.

“I sometimes get upset when fans dismiss modern football. The past was a hell of a lot worse. It’s the depth of English football that really impresses people. Things combine over a generation and we have created something people admire the world over.”

It is a far cry from the English game’s low point in the 1980s. Hooliganism and racism blighted football, and record low attendances were registered across all four divisions between 1984 and 1986.

Most of those improvements have been funded by television rights deals and payments to the lower divisions from the Premier League, the biggest commercial success in world football.

“The Championship is clearly a very, very strong league, and Leagues One and Two seem to be following it. The Football League is a great league and the only thing that stops it getting accolades is that the Premier League is even more successful,” said Ian Lenagan, chairman of the EFL.

“The community activity at Football League clubs makes a massive difference. If you invest in helping your community they tend to come and watch your football club.”

Lenagan said youngsters whose parents followed big Premier League clubs such as Liverpool and Manchester United were now following local teams as a result of hard work within communities. “But it takes a generation, a 15-20 year cycle,” he said.

A good example is at Huddersfield Town, who make every effort to attract young fans by forging partnerships with 190 local schools, and who put aside some of the “solidarity payments” from the Premier League to subsidise ticket prices. They also open their training ground to the public.

“Lots of clubs do it,” said David Threlfall-Sykes, Huddersfield’s head of marketing. “We did some research about 10 years ago and found that too many of our supporters were older.

“We found that kids decide which team they are going to support at about the age of seven.

“Premier League football is so accessible on TV there’s a good chance that a kid from Huddersfield will watch and support one of those teams – so we have to make it as easy and affordable as we can for them to come here and enjoy themselves, and support Huddersfield Town. We’re here for the community.”

Under-eights in Huddersfield can watch games for as little as 1 pound ($1.26), while 8-18 year-olds are charged three pounds, if they buy a season ticket. These children would find it all but impossible to buy tickets for big Premier League games, which are frequently sold out, and which might cost more for a single game than a whole season at Huddersfield.

“Do can do all you want to make football more attractive but you have to make it affordable,” said James Chishem, secretary of Huddersfield Town Supporters Association.

“The club have created so much goodwill, there are loads more kids to going to games now. If they can’t afford tickets, they’ll just watch football on TV and start supporting Man United, Arsenal or whatever.”

Huddersfield’s average attendance is 20,000, up more than 50 percent on last season. One club in the third tier, Sheffield United, are also attracting more than 20,000 to home games while in the fourth tier Portsmouth have an average crowd of nearly 17,000 – more than they had in the old First Division in 1987-88.