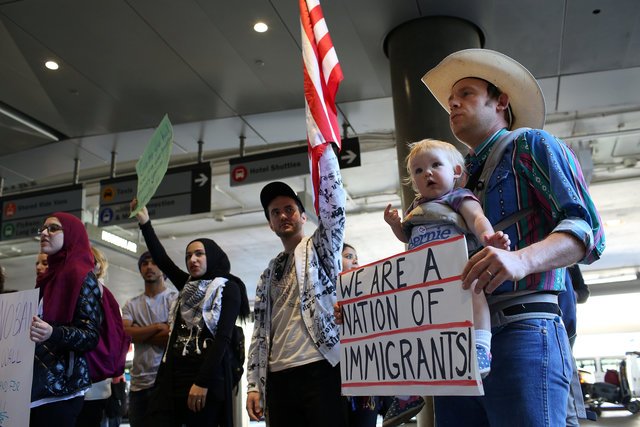 FOR those who say “This is not who we are,” look again. Sadly, it’s who we’ve always been.

President Donald Trump’s executive order temporarily banning travellers and refugees from seven predominantly Muslim countries is only the latest twist of dark threads that have long been present in America. The executive order is not unprecedented. It is evolutionary.

The countries affected by Trump’s executive order – Iran, Iraq, Libya, Somalia, Sudan, Syria and Yemen – have been singled out under American immigration law since the days following 9/11.

But let’s be more specific. Trump’s executive order only lists Syria by name. It refers to the other countries in reference to a 2015 Obama-era law, 8 U.S.C. 1187(a)(12). (And the list thus has nothing to do with any of Trump’s business interests. He did not create it, nor is he the first American president to omit Saudi Arabia from post-9/11 scrutiny.) That list, part of the Orwellian-named Visa Waiver Program Improvement and Terrorist Travel Prevention Act of 2015, disallows use of America’s visa-free travel programme to persons who even once visited the targeted nations. So, for example, British citizens otherwise eligible to enter the United States without a visa must instead appear for questioning and be individually approved for an actual printed visa in their passport at an American embassy or consulate abroad. The rule applies even if their travel was as a journalist or member of a volunteer health team.

Though Trump in his crude style proposes “extreme vetting,” such a process has been in place since the George W. Bush administration, continued under Barack Obama, and is operating today. It too has an Orwellian name, “administrative processing.” Among the nations affected: those same seven countries. People from these nations go through an alternate visa procedure that delays their travel as they wait to be vetted by various intelligence agencies. Some applications are left to pend indefinitely.

There were no mass dissent memos filed by State Department employees over any of those steps.

While the idealised stories of individual refugees heard this weekend are deeply emotional, left undiscussed was the fact that compared to other nations, the United States is quite stingy in the number of people it accepts.

America sets an annual ceiling on refugees; for FY 2016 it was 85,000. Refugee number 85,001, no matter how desperate, waits until next year. Go back to 2006, and the ceiling was 70,000 (though less than 50,000 were actually admitted). There have been refugee “surges” into the United States such as Holocaust survivors following World War Two (650,000 displaced people, opposed by half of Americans) and Vietnamese “boat people” (130,000, opposed by 57 percent of Americans), though Americans historically fear refugees, rather than welcome them.

Since 1980, the United States has accepted fewer than two million refugees overall, and 40 percent of those were children accompanying their refugee parent(s). By contrast, though not limited to refugees, the Obama administration alone deported 2.5 million people.

A total of 30 American governors said they’d refuse to accept Syrian refugees into their states if they could. Some 60 percent of all Americans oppose accepting any Syrian refugees. A little less than half of Americans polled support suspending immigration from “terror prone regions.”

8 U.S.C. 1152 Sec. 202(a)(1)(A) makes it unlawful to ban immigrants (Legal Permanent Residents, green card holders) because of “nationality, place of birth, or place of residence.” The law however is silent on banning non-immigrants such as tourists or students, as well as refugees, for those same reasons.

And even though legal immigrants are not banned by nationality or place of birth per se, yearly limits on the number of immigrants from certain nations are near-virtual bans. For example, the restrictions some Filipino and Mexican relatives of American citizens face amount to a 24-year wait (another Orwellian term, “priority date”) for a green card. It is not uncommon for applicants to die before their turn comes.

Challenges to Trump’s order will be difficult. Acting Attorney General Sally Yates, who was fired after refusing to defend Trump’s executive order in court even after her own department’s Office of the Legal Counsel signed off, appeared to base her opposition on other than strict legal grounds – the intent of the order. She singled out personal objections over whether the order was a “wise or just” policy.

American courts have as recently as 2015 upheld the long-standing non- judicial reviewability of visa decisions made abroad, meaning those decisions cannot be challenged in domestic courts. The United States also generally does not extend the protections of American law to foreigners outside the country. The Supreme Court acknowledges immigration law’s “plenary power” doctrine, leaving most discretionary decisions in the hands of the executive branch. Legal victories this weekend were only limited stays of actions inside American borders, and complied with by the Department of Homeland Security on an exceptional “national interest” basis, not a policy one. It is unclear a Constitutional crisis is afoot.

However, the most noteworthy aspect of Trump’s executive action on immigration is the driver of it all: fear.

The government of the United States, from September 12, 2001 through the present day, has fanned the flames of fear. Despite an American here at home having a greater chance of dying in a fall than by terror, Trump follows his predecessors in warning of attacks inside the Homeland committed by the poster child of fear, the foreign militant infiltrating the United States. “What happened if we didn’t act and somebody was killed?” Trump spokesperson Sean Spicer said in defence of the executive order. The order itself invokes the spectre of 9/11, even further receded into history than the last time it was invoked to support something (torture, leaving Guantanamo open, shoes off at the airport…).

Nothing Trump has done regarding immigration will make America safer. But like much of the security theatre normalised post-9/11, safety is not the point. Keeping fear alive and maintaining the politically-driven myth that government is on the job protecting the Homeland is what matters. Trump knows this, as did Obama and Bush.

The ugly truth is despite the protests, a number of Americans remain afraid of foreigners and want what Trump is giving them. They always have. There is unfortunately little here unique at its core to the Trump era.

Peter Van Buren, a 24 year State Department veteran, is the author of “We Meant Well: How I Helped Lose the Battle for the Hearts and Minds of the Iraqi People.” His next book is “Hooper’s War: A Novel of WWII Japan.” The opinions expressed are his own and do not represent those of the Department of State or Reuters.