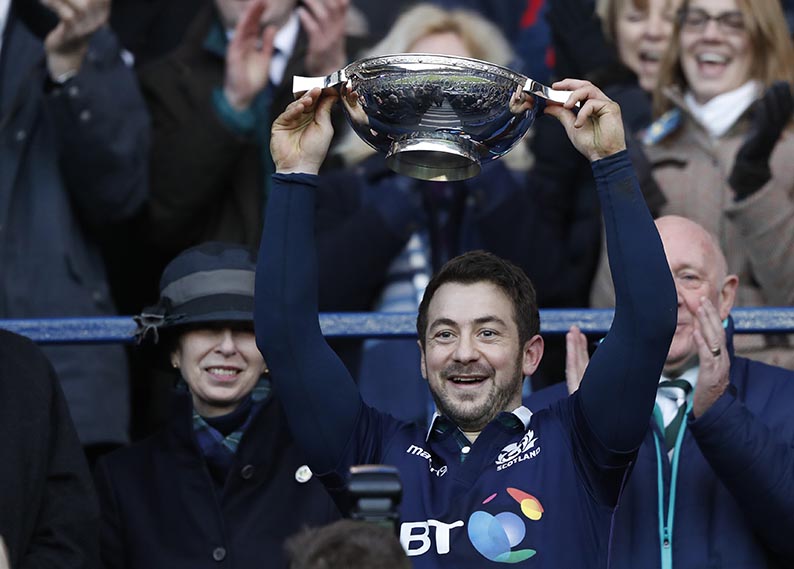 Scotland hung on to upset Ireland 27-22 in a pulsating match at Murrayfield on Saturday and secure their first opening day win in the Six Nations for over a decade.

Two late penalties from captain Greig Laidlaw snatched a victory for the Scots that was founded on a dazzling first-half display which pushed the hosts into a 21-8 lead at the break.

Fullback Stuart Hogg, the player of last year’s tournament, scored Scotland’s first two tries and centre Alex Dunbar dotted down for an unconventional third in a set move from a lineout.

“That was a cracking game,” Hogg told the BBC. “We switched off a bit in the start of the second half but the boys are delighted with that result and a great way to kick off the Six Nations here at Murrayfield.

“The boys stuck to it but credit to Ireland – they were fantastic in the second half,” Hogg added.

It was an impressive performance by Scotland but perhaps one that fans knew might be on the cards with many of the Glasgow team that demolished Leicester 43-0 in Europe’s top tier club competition just weeks ago in the side.

Scotland had not won their opening game of the Six Nations since 2006 and entertaining an Irish side who beat the mighty All Blacks last year was a tough task.

Yet in the first half it looked straightforward.

Wave after wave of attacks created an overlap for Hogg to collect a scrappy pass from flyhalf Finn Russell and open the scoring within the first ten minutes.

It was not long before Hogg added to his tally with an audacious dummy, allowing him to ghost past Earls out wide.

Earls crossed for his own try in the corner minutes later to take the scores to 14-5, before the Scots added a training-ground third.

Dunbar bamboozled the opposition forwards by moving into the heart of the lineout, snatching the ball off the top and running over unchallenged. Laidlaw converted again and Jackson added a penalty to take the scores to 21-8 at halftime.

Ireland came out firing in the second half and quickly clawed back to 21-15 when Henderson crashed over from close range.

Scotland had winger Sean Maitland to thank for maintaining their lead after an intercept and a last-gasp tackle prevented try-scoring chances, before Jackson converted his own try to give the visitors a 22-21 lead as the match headed into its final quarter.

With Scotland’s hopes of a famous win seemingly slipping away, Laidlaw kept his cool and added two penalties in the final ten minutes.

Ireland captain gears up for crucial game against Wales