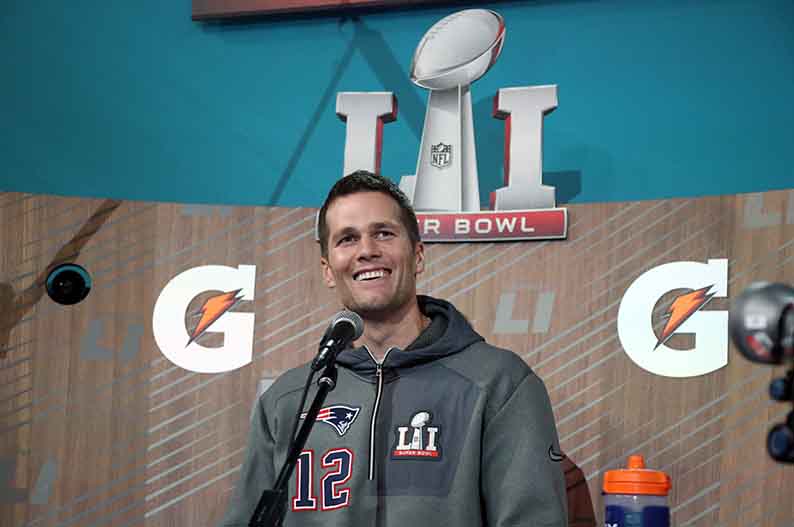 The New England Patriots are at it again, appearing in their record ninth Super Bowl, and the AFC champions are as excited as ever for another run at National Football League glory.

“This is a once in a lifetime opportunity that I’ve had seven chances at. That’s pretty crazy,” quarterback Tom Brady, 39, told reporters.

The franchise’s first two trips to the Big Dance ended in defeat for the Patriots in 1985 and 1996, but they have been a dominant force since the start of the extraordinary, 17-year partnership of head coach Bill Belichick and Brady.

The Patriots have won four of six trips to the Super Bowl during their remarkable run and another win together over the Atlanta Falcons on Sunday would give Belichick the most championship titles as a coach and Brady the most among quarterbacks.

“I know that winning the game is a hell of a lot better than losing this game, because I’ve had some of the longest nights of my life after these losses,” said Brady.

Reaching the playoffs in 16 of the 17 years, missing only in 2008 when Brady was injured, is a testament to their long association and their adaptability, former Super Bowl-winning quarterback Phil Simms said on a conference call.

“Think of all the meetings they’ve had. All the plays, situations they go through, and they constantly are changing,” said former New York Giant Simms.

“Bill Belichick has run basically four different offenses since he’s been in New England. They keep parts of it as time goes along.

“The library of plays they have at their disposal is second to none. Not only that, we see it during the game.”

Simms said the Patriots run variations to confuse defenses. “Once they get you thinking on defense, that takes aggression away and a huge advantage goes to the offense.”

Creativity is not restricted to their offense, as Belichick, a former defensive coordinator, has a defense that allowed the fewest points this season.

In the age of the salary cap, maintaining excellence is harder than ever. The Patriots have been cold and calculating about when to shed a high-paid player and uncanny in developing replacements.

Players such as Lawyer Milloy, Ty Law, and Adam Vinatieri in past years have been jettisoned, a fate that fell recently to Chandler Jones and Jamie Collins.

Unheralded players have risen to stardom including Malcolm Butler, who as an undrafted free agent rookie clinched a 28-24 triumph in the Super Bowl two years ago against Seattle with an interception at the goal line with 20 seconds left.

Some detractors say the Patriots’ success is tarnished by the Spygate and Deflategate cheating scandals that cost them fines and number one draft picks, but it is hard to deny them credit for a sensational reign as the NFL’s best.

Leicester out to halt demise against United