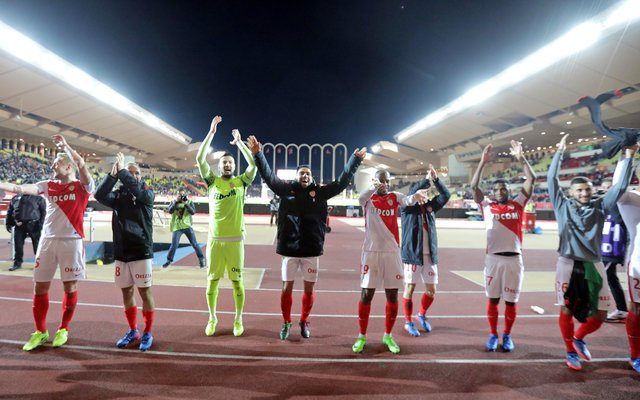 Monaco moved three points clear at the top of Ligue 1 on Saturday, reaching a milestone thanks to Radamel Falcao’s double in a 3-0 drubbing of Nice.

The principality side have now netted 100 goals in all competitions this season, a good omen looking ahead to their Champions League last-16 first leg at Manchester City this month.

Leonardo Jardim’s side, who have scored 68 league goals in 23 matches, have 52 points.

Nice are third on 49, behind Paris St Germain on goal difference after late goals by Thiago Silva and Edinson Cavani gave the champions a 3-1 win at Dijon.

After a shaky start, Monaco found their pace and Bernardo Silva had two first-half strikes saved by goalkeeper Yoan Cardinale.

Valere Germain opened the scoring from Benjamin Mendy’s cross two minutes into the second half.

Nice’s hopes of an equaliser were thwarted six minutes later when Mario Balotelli, who had a below-par game, was ruled offside as they took a corner.

Colombia international Falcao picked up a pass from Mendy to score his first goal in the 60th minute and took his league tally to 14 with nine minutes remaining when he beat Cardinale with a shot into the corner of the net.

Lucas opened the scoring for PSG from a packed goalmouth in the 29th minute but Dijon were quick to react, Julio Tavares equalising two minutes later from Lees Melou’s cross from the right.

Silva scored at the far post nine minutes from time with Cavani wrapping it up from close range in the 84th.

Kane spot on as Spurs edge past Boro