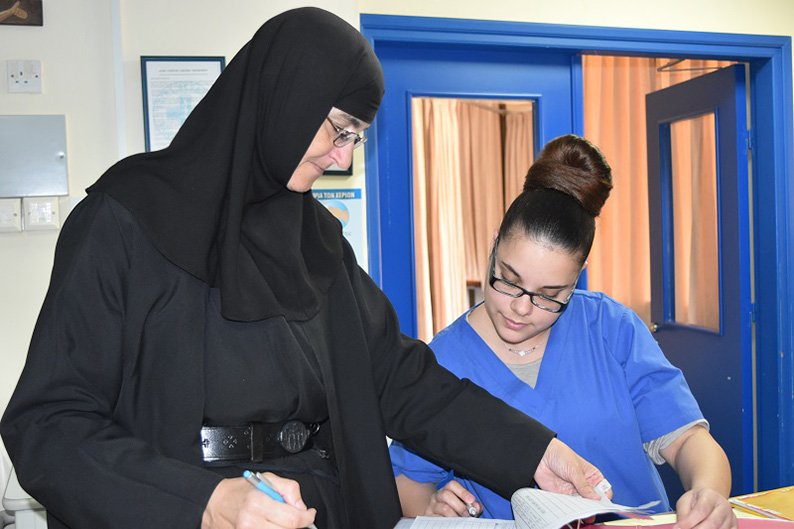 Doctor Pansemni with a hospice nurse

A Greek Orthodox nun who is also a doctor and dedicated to palliative care has joined the Friends’ Hospice in Paphos.

One and a half years ago, Doctor Pansemni Aristi Aristodemou, left the Holy Convent of the Annunciation of the Blessed Virgin Mary, a monastery at Ormylia in northern Greece where she had spent the last 21 years of her life to travel to Cyprus and continue her vocation.

After spending a few months as a palliative care doctor with PASYKAF, the association of cancer patients and friends in Nicosia, she is now at the Friend’s Hospice in Paphos.

She explained to the Sunday Mail that she is rather an exception than a rule, as it is fairly unusual for Greek Orthodox nuns to hold down jobs as well.

A few years ago whilst undertaking a master’s degree in palliative care at King’s College London, she travelled to and from the monastery in Greece.

“This was novel as they had never had a nun participate before and it was also an unusual situation for the nuns at the monastery, I was an exception and so I tried to keep it all rather low key, even though I was sometimes flying in and out.”

Although the doctor had been exposed to the outside world, the adjustment of living outside the monastery is still, understandably, taking time.

“It was my intention to stay at the monastery for life, but things change and God takes you in different ways. I’m now learning to take one day at a time, and I will carry on my monasticism as much as I can.”

The hospice which opened in 2006 provides free palliative and respite care to patients whatever their nationality or religion and their families. It is housed in a dedicated wing at St George’s Polyclinic in Paphos.

“As well as being a first-class doctor, Pansemni has a wonderful personality, full of life and love, and this is having a great effect on patients and staff alike,” said Dr Andreas Demetriou, clinical director of the hospice. “She has a natural gift of patience and gentleness which is so important for those in our care and for their families.”

Chris Jones, president of The Friends’ Hospice Foundation said the facility was privileged to gain her expertise in palliative care and as a sister in the Orthodox Church she also brought a sense of calm and compassion which has a hugely positive effect.

Doctor Pansemni exudes an aura of warmth and kindness; tall in stature she presents a dignified figure wearing her black habit, her eyes are friendly and reassuring. The nun puts her clear skin and lack of facial lines down to a stress free life in the monastery.

Born in Foini village in 1965, her family moved to London when she was twelve to help organise education for Greek Cypriot children in London and she went on to study medicine.

As a doctor, she worked in some of the busiest hospitals in London, including renowned Guys’ Hospital. She often refers to herself as ‘Sister P’ and said that she enjoys the science of medicine as well as the vocation of helping people.

“I realised that this speciality (palliative care) is about truth. You can stop pretending that you can cure a problem and really care for patients.”

In London, Doctor Pansemni also met Dame Cicely Saunders, best known for her role in establishing the hospice movement in the UK, which helped her decide that she would concentrate on palliative care which was emerging at the time.

Parallel to her interest in hospice care, the doctor’s spiritual life was beginning to evolve and she started to attend a monastery in Essex.

“There I realised what beauty there was in the Orthodox liturgy and as I heard it in English, I understood what was being said as ancient Greek is not accessible for everyone.”

She took a sabbatical to study French at the Sorbonne in Paris, where she also took a theology course at St Sergius’ seminary. Returning to England from Paris, she began working at St Joseph’s Hospice in Hackney in London, looking after a large and diverse community.

“With hospice care, you really see the value of a person and patients stop being patients or numbers. They are people. I realised that to be able to serve the people, I needed to be a better person myself and through prayer my spiritual cultivation got underway as much as it could do.”

She said that her monasticism came as a choice and on Christmas morning in 1993, she realised that she had to go to live in a monastery. She chose the monastery at Ormylia in Northern Greece where she had visited the previous summer.

“The feeling of giving your life back to God is the most wonderful feeling of grace, it feels like you’re flying,” she said.

Even in monastic life, Dr Pansemni continued with her medical activities, caring for 120 sisters and visitors, and attending conferences and seminars concerning cancer preventive medicine.

A year and a half ago, after more than two decades at the monastery, she decided to come out of the monastery to serve.

“It’s a super privileged position to be with these people, it’s such a sacred time for them. Each person is special and unique and so is the life that they hold. Even if you just help one person in all your life time that’s enough, as long as you don’t hurt anyone along the way.”

A mountain trek in aid of Kenyan orphans

Tales from the Coffeeshop: Threats, however silly, will always work in Kyproulla