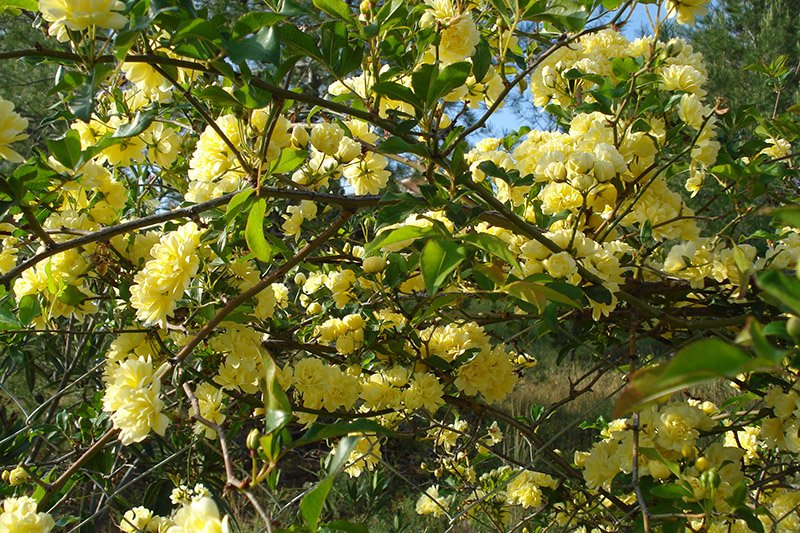 February already, and with Christmas poinsettias consigned to the compost heap, the next big event in the Horticultural Trade is Valentine’s Day! Who was St Valentine? According to what you read, he was a Roman priest who during the reign of Emperor Claudius Gothicus was arrested and imprisoned after being caught performing marriage ceremonies between Christian couples. Claudius stated that soldiers were not allowed to marry at all as sex sapped their strength! A more modern day equivalent to this rule might be applied to top ranking professional football players, as they are incarcerated away from their ‘wags’ before a big match.

Indeed, until recent times, British Army Officers were not encouraged to marry until they were at least 25 years old. This was to allow them to develop their military skills without diversions!

The Latin name for rose is Rosa, meaning red, and from earliest times the Romans used them in feasts and orgies! We still celebrate Valentine’s Day each year with our love for those who are dear to us, remember your Greek mythology and Aphrodite’s love for Adonis. The most popular flower given on Valentine’s Day is the red rose as this flower is recognised not only as the symbol of love and passion, but magic, hope and the mystery of life. A single, perfect red rose coupled with a spray of Baby’s Breath, is considered a Signature Rose by florists. As a result of which, they are much sought after, causing growers to flood the markets on February 14 with masses of them, some of which are flown in from as far afield as Kenya, Ethiopia and Latin America and are therefore expensive!

The roses that we know today evolved from the apothecary rose Rosa gallica. Roses that are still held in high esteem include the White Rose of York and the Red Rose of Lancashire, and a little later on the Tudors used them in their heraldry. Empress Josephine, the ex-wife of Napoleon, had a wonderful rose garden and the names of many of her courtiers were immortalised in her roses.

Unnamed rose cuttings of the later most famous of all roses were smuggled out of France into America just before the Nazis invaded, where they were brought on and grown with much success. By sheer coincidence on the same day that two doves were released into the American sky to symbolise the naming of the rose, Berlin fell and a truce was declared. In naming the rose, this simple statement was read. “We are persuaded that this greatest new rose of our time should be named for the world’s greatest desire: ‘PEACE’.” Peace roses flourish around the world with their vigour, hardiness and lasting blooms. Peace is the ‘mother’ in 150 varieties and the ‘father’ in a further 180 varieties. Indeed, it is probably safe to say that most of our modern roses are descended in some way from Peace.

WHAT TO DO IN THE GARDEN THIS MONTH
With all the rain we have had this winter so far, your outdoor potted plants might be sitting in saucers full of rainwater, so check them and drain them if necessary. Many plants die because their roots are too wet, succumbing to root rot, so give them a chance by keeping an eye on them. Being awash with rainwater isn’t always sufficient and they may need a quick burst of liquid fertiliser now and again. 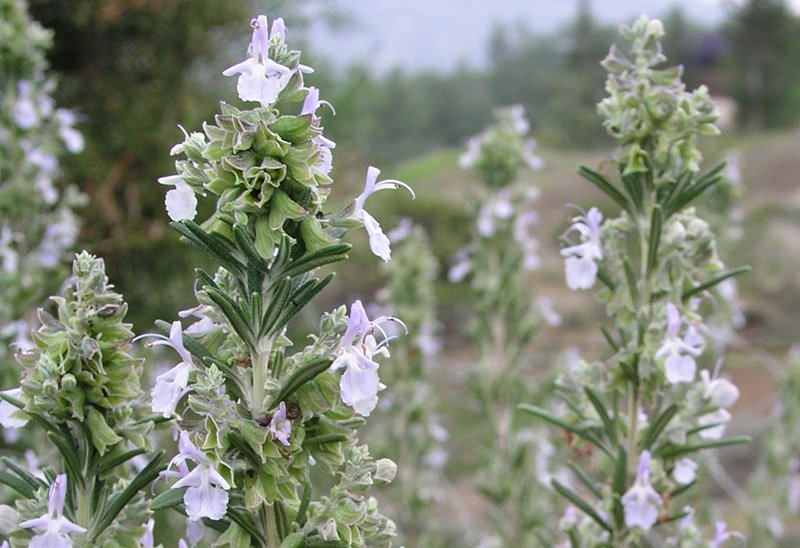 Fruit and nut trees need a feed this month too, this time with a high nitrogen fertiliser – the first number on the back of the pack. Nitrogen is necessary for stem and leaf growth so apply 900g to adult trees and 300g to young trees. There is also some pruning to be done now. Many citrus trees will still have fruit on them, so leave those branches for now and return to them once the fruit has been picked.

The main aim of pruning is to keep the trees to a manageable level for fruit picking. It’s important to have a good circulation of air in the centre of the tree to avoid mildew, so take off any dead, diseased or crossing branches. Olives may also need a prune as well as grapevines and the latter need a cold winter period but not less than 3-8C.

Again, like other fruit trees, remove any dead or diseased wood and cut the fruiting stems back to one or two buds, pinching out all but the strongest of new shoots. You will need to go back to them when they are in leaf and make some minor adjustments. New vines can be started off from strong cuttings, by placing them in the earth at this time and leaving them until they show signs of life. This might take a while though, but such fun!

Although the soil is still quite cold, you can prepare to move shrubs and trees and plant new ones. First, dig your eventual hole much bigger than the ball of the tree or shrub, and make sure that both hole and tree are damp. With a newly bought tree check that the roots are not entangled and growing in a circle in the pot, which means that the plant has been in the pot too long. Add some bone meal or slow-release fertiliser to the bottom of the planting hole and fill in the sides with some fresh compost, making sure that the plant is upright. Large trees may need some staking, so it is best to put this in first or you may drive it through the root ball, causing damage to the roots. Do not plant trees or shrubs near cypressus hedges, leaving a gap of 3 metres from them.

Other pruning jobs now should include Jasminum officinale, until recently known as Jasminum grandiflorum, the summer flowering, sweetly-scented jasmine. There may be lots of growth still on the plant but there will be no flowers unless you take this action. This jasmine needs to be cut right back to the wood as the flowers appear on the ends of new stems. Sometimes you have to be cruel to be kind! Jasminum mesnyi, the winter flowering jasmine is coming into flower now and what a joy to see the double bright-yellow flowers. Prepare yourselves for pruning bougainvilleas, as they can be vicious and bite back, by protecting your eyes and bare flesh from their nasty thorns. Their flowers appear at the end of the long stems too. Lastly, clip lavenders and rosemary, as they can go to wood if left to grow without attention and in the case of rosemary, the branches can open up, looking very unattractive.

Check any roses to see if the roots are still firmly in the ground and prune the stems with a slanted cut above an outward facing bud, so that you don’t get any inward growth and then give them a feed. I am always being asked when Banksia roses should be pruned and how. James Shirley Hibberd (1825-1890), one of the most popular and successful gardening writers of the Victorian era, describes the Banksia rose as having a disorderly habit of growth. The largest ever Banksia rose alive today was planted in 1885 in Tombstone, Arizona. The tree officially covers about 840 square metres, and its gnarled trunk is about 3.5m around. Hibberd also remarked that they thrived on the dry chalk in southern England, enjoying warmth and sunshine. My Banksia, which is nowhere near the size of the one in Tombstone, enjoys the sunshine along a fence line in relatively poor soil and with only a little feeding in the early spring. I only remove any obvious dead wood. I haven’t been successful with propagating this charming butter-coloured clustered rose and the problem is that the flower buds may be unwittingly removed unless you really know what you are doing. Sometimes things should be just left to the experts!

PLANT OF THE MONTH
Pyrostegia venusta
Most commonly known as the Flame Vine, Pyrostegia venusta, a member of the large Bignoniaceae family, is a fast-growing evergreen vine whose vivid, orange, tubular flowers bloom from winter into spring. The very attractive flowers are sometimes so heavy that they droop downwards. The plant throws out many shoots and tendrils that latch onto any available support and can quickly cover an unsightly wall or fence line or even the side of a house! 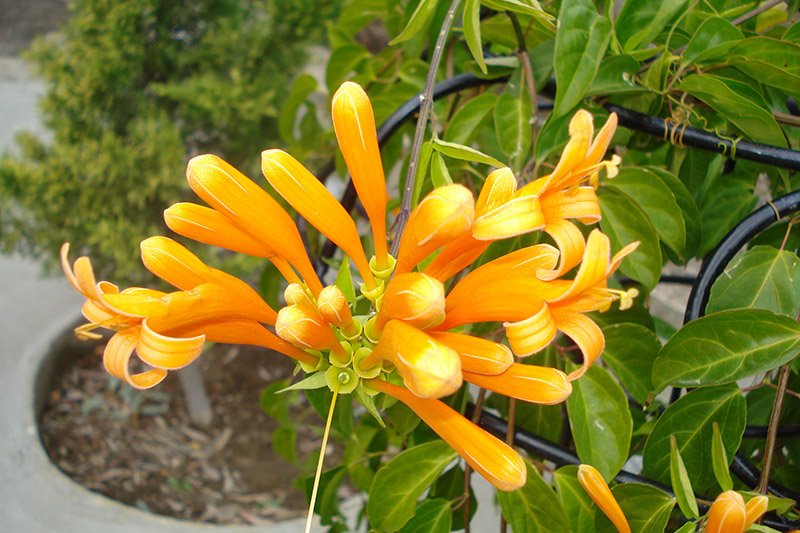 Coming originally from southern Brazil, northern Argentina and Paraguay, pyrostegia is accustomed to growing best in tropical or subtropical conditions, although it can grow more modestly in less warm and humid places. In ideal situations, it can reach over 24 metres long but severe pruning after flowering will curb its growth and in the following season there should be even more flowers. Grow pyrostegia in full sun for best results, although the plant can tolerate some shade, it can cope with drought conditions once established. Some watering in very dry conditions is helpful though. Propagation is by semi-ripe cuttings in summer.

Pyrostegia appears to be pest and disease-free and tolerant of any soil conditions. It requires little maintenance apart from summer pruning.

Why the majority want partition

A mountain trek in aid of Kenyan orphans