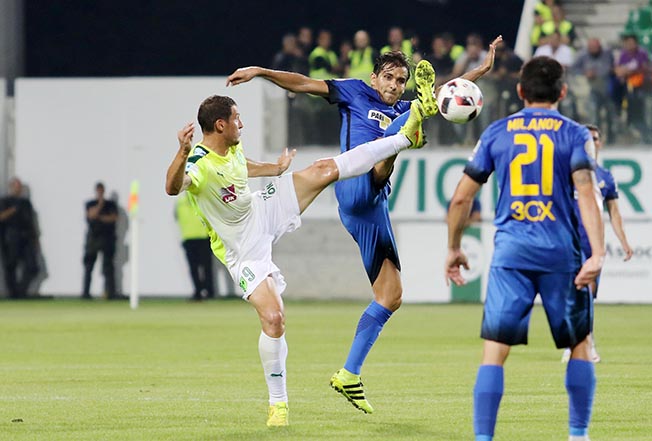 Rematch: Apoel and AEK played out a 1-1 draw in Larnaca at the end of October

From this weekend until the end of the regular season, there will be at least one game that will involve two of the five teams challenging for the title, beginning this Sunday with the clash between leaders Apoel and second-placed AEK.

The other three challengers, Ael, Apollon and Omonia, are up against teams that are battling for their first division survival – AEZ, Doxa and Aris respectively – while Nea Salamina clash with Ermis Aradippou in a game that may decide to a large extent who will land the final sixth place in the top group.

More than 13,000 fans are expected to watch the top of the table clash between Apoel and AEK at the GSP stadium.

Apoel have been in impressive form recently, notching eight wins and a draw from their last nine league games, a run that has enabled them to create a five-point cushion to their nearest rivals.

On the other hand, AEK are going through a sticky patch having drawn their last two games against teams rooted at the wrong end of the table. However the GSP is a happy hunting ground for the Larnaca team, having defeated Apoel three times and losing just once in their last seven visits.

Apoel’s Danish coach Thomas Christiansen is expected to be without his only recognised right-back Zhivko Milanov, with Kostas Artymatas expected to take his place, while winter signing Cedric Yambere may be preferred to Giorgos Merkis to partner Inaki Astiz at the heart of the defence.

Another of Apoel’s recent signings, David Barral, has overcome his injury and should resume his partnership with Pieros Sotiriou in attack.

AEK may also give a debut to one of their recent signings, French striker Florian Taulemesse, who was brought in from Belgium’s Eupen to replace the misfiring Andre Alves.

AEK coach Imanol Idiakez urged the Larnaca team’s supporters to travel in numbers to Nicosia to help their side in what he described as “a most difficult game where we need all the support we can get.”

Fifth-placed Omonia travel to Limassol to face Aris with both teams needing the points for different reasons.
The visitors need the win to stay in touch with the top four teams as they already have a five-point deficit from fourth-placed Apollon and are 11 off the top, while Aris need the points to steer clear of the relegation zone.

Much improved Anorthosis have a seemingly easy task against bottom side Anagennisi Dheryneias, who have yet to record a win this season.

The Famagusta team has managed to close the gap to sixth-placed Ermis Aradippou and despite losing their star striker Ismail Goncalves to Scottish side Hearts during the January transfer window, they should be too strong for a team that seems certain of the drop.

The Monday game between Karmiotissa and Ethnikos (7pm) concludes round 22 of the championship.

“Tell them you have the best climate in EU, all year-around”