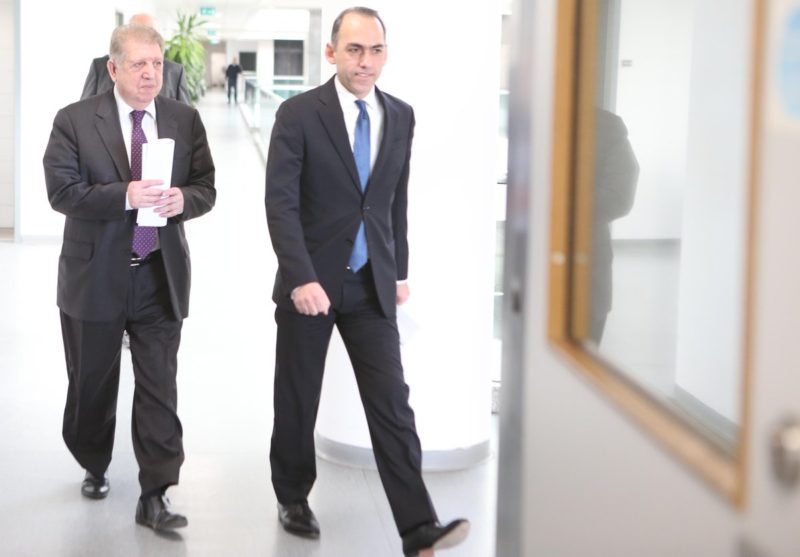 Finance minister Harris Georgiades and the secretary general of civil servant union Pasydy Glafcos Hadjipetrou signed on Monday an agreement tying the public payroll increase to that of the economy and providing for zero increases in negotiated pay rises, the finance ministry said.

The agreement, which follows the signature of a similar agreement with unions representing workers at semi-governmental organisations, as the state-owned corporations are widely known, on January 4, provides putting forward a draft bill to indefinitely freeze “first appointment and promotion” and “first appointment” in the public sector, as part of a policy to contain employment levels in the public sector, the finance ministry said in an emailed statement on Monday. The agreement exempts promotions of existing civil servants as they do not lead to an increase in employment levels in the public sector “while they are deemed necessary for the smooth operation of department and services”.

“Any needs that emerge for categories of vacancies will be evaluated on a quarterly basis via the procedure provided by the legislation and possible unfreeze requests will be forwarded to parliament for approval,” the finance ministry said.

In an interview in December, the finance minister said that following the parliament’s decision to reject a bundle of proposed bills improving human resource management in the public sector, the government would consider extending a hire freeze implemented already before Cyprus signed its bailout agreement almost four years ago, in an attempt to avoid repetition of the previous fiscal derailment.

The freeze, combined with a general freeze on pay rises in the public sector and other fiscal measures including a 10 per cent drop in hiring wages and a permanent up to 12.5 per cent decrease in wages, helped reduce the government’s staff expenses 23 per cent to €2.2bn in 2015 from €2.9bn in 2011. These measures were on top of the extraordinary levy on wages which was phased out last year.

In addition of the negotiated pay increase, the general freeze included also the incremental salary increases received by public workers according to seniority and a compensation for the loss of purchasing power to inflation, which are reinstated after overhauling the formula of indexing wages to inflation.

“The two sides also agreed that within 2017 or as part of the 2018 budget, to discuss and put forward the abolition of permanent vacancies,” the finance ministry said. The finance ministry and Pasydy also agreed on “a partial improvement” of how overtime pay and shift allowance is calculated which will have a budgetary impact of €5.5m compared to a saving of €26m in 2015.

The two sides also agreed that as part of the wider reform of the provident fund sector, to conclude negotiations on the introduction of a provident fund for workers appointed after October 2011, which will concern also casual workers, the ministry said.

“Any other issues will be resolved in the context of the institutionalised dialogue of the mixed staff commission,” the ministry added.

The chairman of the Fiscal Council, a body tasked with monitoring the drafting and execution of the government’s budget, said that the agreement should not be interpreted as the formula based on which pay increases will be granted.

“It’s only a safety valve to protect against excessive increases in the government payroll,” Demetris Georgiades said in a telephone interview.

Still, “our position is that pay rises should be justified with special studies, taking into account productivity, the situation in the public sector and what goes on in the rest of the European Union and it should not be indiscriminate,” he said.

Jazz performance to balance it out

Points shared in top of the table clash