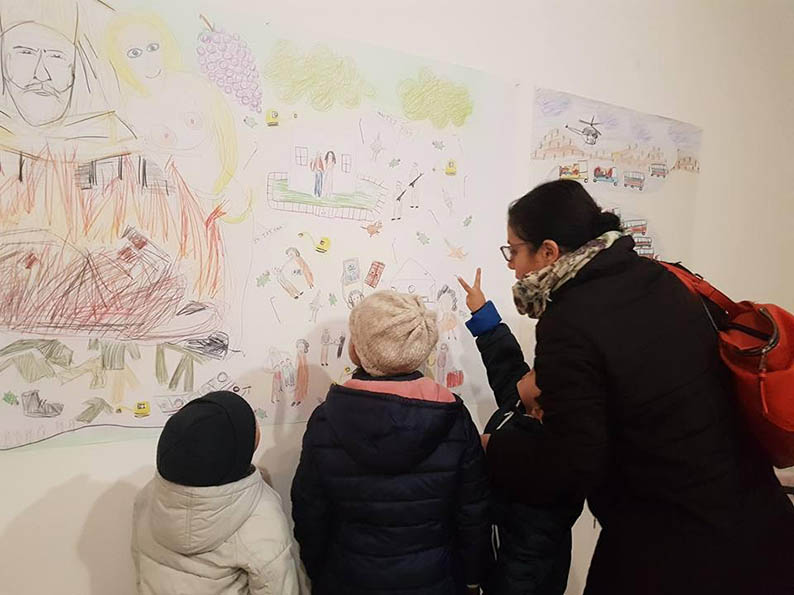 A drawing by a Turkish Cypriot artist showing Archbishop Makarios with a naked woman depicting Aphrodite has caused controversy at an exhibition in Paphos and led to demands that it be withdrawn.

The exhibition titled ‘Planites’ is part of the official programme of the Pafos2017, the town’s cultural capital title and is being held at Palia Ilektriki.

The work by Nurtane Karagil, 28, titled: ‘The Dawn and the Sunset’ has led to complaints as it depicts Archbishop Makarios, a naked Aphrodite and Cyprus in flames.

Curator of the exhibition, Elena Parpa, told the Cyprus Mail that neither she nor the artist, who is currently in London, expected this sort of reaction.

“Society has reached a point, I thought, where we could face history and all of its traumas and openly discuss experiences away from the historical narrative of both sides. It seems as if there is still a way to go to work through it.”

Parpa said that she understood that the work had caused controversy and debate, as some visitors to the exhibition have expressed opposition to the context of the drawing.

She said that the drawing depicts the Turkish Cypriot forced migration from Paphos, many in busses and trucks, after the 1974 invasion.

According to officials, the Archbishop Makarios Historical Cultural Centre of the village of Panayia, Makarios’ birthplace,  has formally asked the organisation of the Cultural Capital of Europe 2017 for the immediate removal of the art, while denouncing the case to the Archbishop of Cyprus and Paphos Bishop.

Phileleftheros reported that the centre’s president Costas Christodoulou, said that the work showed an unacceptable tolerance on the part of the exhibition organisers and the state.

“We do not see any accidental symbolism” he said. “The author is attempting to deconstruct Archbishop Makarios. We also consider the justification of the Turkish Cypriot artist that the work relates her childhood memories, as ridiculous as she could have no such memories, because then there were no statues or similar illustrations.”

However, the curator explained that the artist often uses a childish approach to a piece, as she does here, in order to negotiate a traumatic experience. As part of her research, Karagil interviewed Turkish Cypriots from Paphos who experienced the forced migration following 1974. She found out that the codename used for the operation was ‘Aphrodite 1’ and ‘Aphrodite 2.”

During a visit to Paphos, the artist was struck by the use of Aphrodite in many places as well as statues of Makarios and their use as symbols for the town.

“This impressed her and she used both of these as symbols in a contemporary way, they are depicted observing from above, the development of the enforced migration.”

The curator noted that it was not Makarios whose likeness is used as such, but his likeness from the statue which sits close to the old District officer’s residence, now used as the offices of Pafos2017.

She said that art is a space to express ideas freely, even if others disagree with you.

“The demand for its withdrawal is unfortunate and art creates different points of view. It should most definitely stay and people should have the right to be viewed as an artist, we have to have respect for each other.”

The curator noted that neither moral, aesthetic nor political points of view can dictate acts of repression of freedom of expression.

“Everyone is entitled to their own opinion, but to remove the work from the exhibition especially when Paphos is the cultural capital of Europe which protects the freedom and expression of art would be a mistake.”

Arrest made after bugging of All Blacks’ Sydney hotel