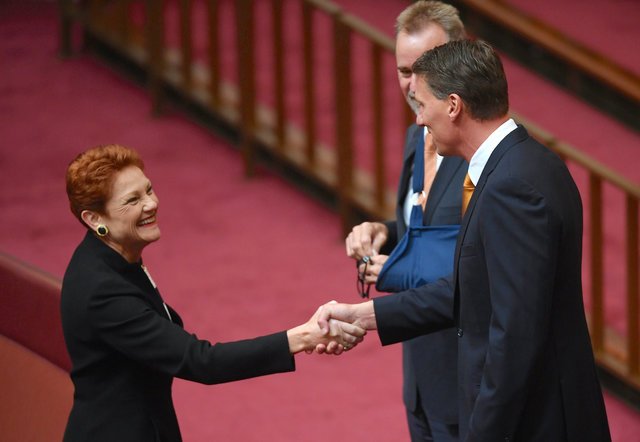 The defection of Senator Cory Bernardi to form the Australian Conservatives, seven months after Turnbull’s Liberal-National coalition claimed an unconvincing election victory, further weakens the centre-right government’s hopes of pressing ahead with its legislative agenda.

Bernardi said he hoped his new party would offer a refuge for disillusioned right-wing members of the coalition at a time when traditional conservative parties are under threat from a shift to the right that has favoured parties like Pauline Hanson’s nationalist One Nation.

Turnbull won a razor-thin majority at last July’s election and faces having to cobble together a minority government if Bernardi is able to entice just a single lawmaker from the lower house of parliament to join his new party.

Bernardi said he had not yet approached any coalition members and offered only limited support for Turnbull’s legislative agenda in the upper house Senate, where the government is already in the minority.

“It is about lower taxes and … better outcomes for families, fostering enterprise, restricting the scope of government and building society,” Bernardi said.

“If they put forward good policy, I will support them,” he told reporters in Canberra.

Australia‘s last minority government was under the Labor party between 2010 and 2013, an unstable period when legislation was frequently blocked and leadership speculation swirled constantly around then prime minister Julia Gillard.

The socially liberal Turnbull is already deeply unpopular, with an opinion poll on Monday showing support for his coalition at its lowest in more than a year, eight points behind Labor. Turnbull has struggled to make an impact since he toppled his more conservative predecessor, Tony Abbott, in a party-room coup in September 2015.

Bernardi’s Australian Conservatives also represents the biggest split in the Liberal party, the senior coalition member, in a generation.

“We have a divided government where the right hand doesn’t know what the far-right hand is doing anymore,” said Senator Richard Di Natale, leader of the small but influential Australian Greens.

“The government is now in turmoil, in absolute turmoil,” he told reporters.

There were few signs from within Turnbull’s government that the split would be amicable.

“If Bernardi really wants to restore faith in politics, he must resign and recontest as an Independent, otherwise it’s all hot air,” senior minister Christopher Pyne said on Twitter.

Support for One Nation – which first gained international notoriety in the late 1990s with its appeal to white nationalism – hit a high of 8 percent, Monday’s Newspoll showed.