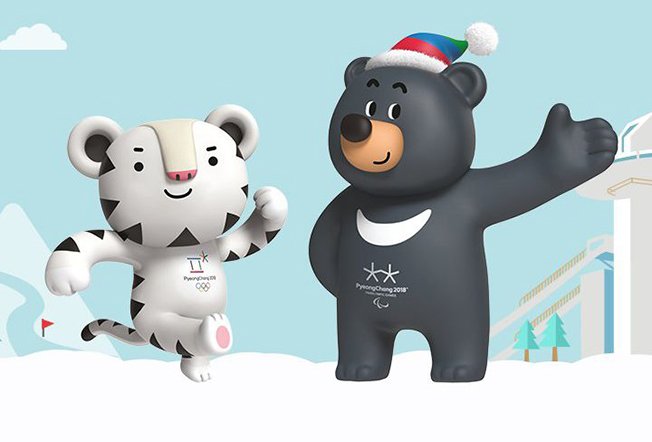 A white tiger, a mythological guardian in South Korean folklore, will be the mascot for the country’s first Winter Olympics, while the Asiatic black bear will be the Paralympics mascot

With the Winter Olympics just a year away, Europe’s broadcast rights holder is dangling a host of technological breakthroughs – from ghost skiers to performance patches – which it says will enhance the drama of the Pyeongchang Games.

February 9 marks the one-year countdown to the South Korean Games, and Eurosport CEO Peter Hutton says the sports broadcaster will spend that year continuing to test new technology as it looks to revolutionise coverage.

“Subject to all the approvals from federations and the International Olympic Committee, I’m hopeful we will be able to use some very cool technology to bring more data to the sports than ever before,” Hutton told Reuters on the sidelines of the World Skiing Championships.

“We’ve seen tests of patches which show not only heart rate and positioning of athletes, but can also show how tired an athlete is, or how much power they are using.

“These patches feed data direct to viewers, or to commentators which can make sport more understandable… more dramatic.”

Hutton said he was confident the technology would mark a big leap forward for sports viewers and that he had held talks with sports federations eager to harness the data for themselves.

“Some of this data is really revolutionary, the challenge now is knowing what to do with it, how to use it to tell stories.”

One of the most compelling technologies being tested is the use of ghost skier graphics depicting the last run, or quickest run so far, to compare with the skier on the course.

“It is not as easy as you might think… everything happens so quickly,” production head Arnand Simon told Reuters.
“With the human eye it is very, very difficult to be able to tell who is doing better or who is leading. But with technology we can show many aspects from a skiers speed to their acceleration.”

Hutton says the ghost skier could transform the viewing experience in a way similar to the world record line being beamed onto swimming races.
“It instantly puts the performance in context,” he said.

Initially, the technology would have to be voluntary, Hutton said, but the Paris-based Englishman does not see that as a barrier.

“We have seen cyclists asking for technology to be put on their bikes, he laughed. “Because it puts them centre stage in the story… and typically athletes like to be centre stage.”

Eurosport, through parent company Discovery Communications, bought the exclusive multimedia rights to broadcasting the Olympics in some 50 countries and territories in Europe in a 1.3 billion euros deal which began on January 1 and takes them through to the 2024 Olympic Games.

Iran ‘thanks’ Trump, rebuffs US warning on missiles (Updated)