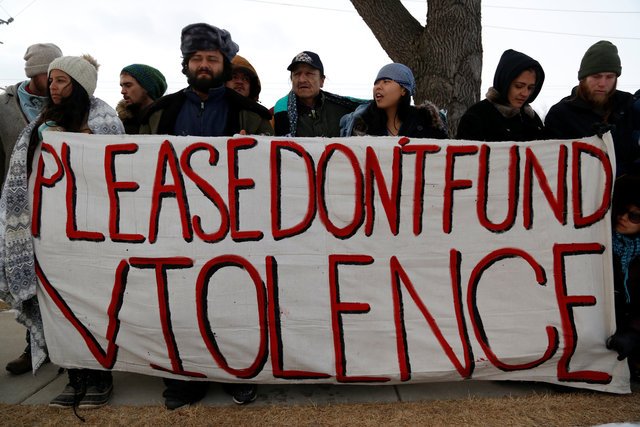 Opponents of the Dakota Access oil pipeline rally outside the Bank of North Dakota in Bismarck, North Dakota, US, January 31, 2017

The US Army will grant the final permit for the controversial Dakota Access oil pipeline after an order from President Donald Trump to expedite the project despite opposition from Native American tribes and climate activists.

In a court filing on Tuesday, the Army said that it would allow the final section of the line to tunnel under North Dakota‘s Lake Oahe, part of the Missouri River system. This could enable the $3.8bn pipeline to begin operation as soon as June.

Energy Transfer Partners is building the 1,170-mile (1,885 km) line to help move crude from the shale oilfields of North Dakota to Illinois en route to the Gulf of Mexico, where many US refineries are located.

Protests against the project last year drew drew thousands of people to the North Dakota plains including Native American tribes and environmental activists, and protest camps sprung up. The movement attracted high-profile political and celebrity supporters.

The permit was the last bureaucratic hurdle to the pipeline’s completion, and Tuesday’s decision drew praise from supporters of the project and outrage from activists, including promises of a legal challenge from the Standing Rock Sioux tribe.

“It’s great to see this new administration following through on their promises and letting projects go forward to the benefit of American consumers and workers,” said John Stoody, spokesman for the Association of Oil Pipe Lines.

The Standing Rock Sioux, which contends the pipeline would desecrate sacred sites and potentially pollute its water source,

vowed to shut pipeline operations down if construction is completed, without elaborating how it would do so. The tribe called on its supporters to protest in Washington on March 10 rather than return to North Dakota.

“As Native peoples, we have been knocked down again, but we will get back up,” the tribe said in the statement. “We will rise above the greed and corruption that has plagued our peoples since first contact. We call on the Native Nations of the United States to stand together, unite and fight back.”

Less than two weeks after Trump ordered a review of the permit request, the Army said in a filing in District Court in Washington DC it would cancel that study. The final permit, known as an easement, could come in as little as a day, according to the filing.

There was no need for the environmental study as there was already enough information on the potential impact of the pipeline to grant the permit, Robert Speer, acting secretary of the US Army, said in a statement.

Trump issued an order on January 24 to expedite both the Dakota Access Pipeline and to revive another controversial multibillion dollar oil artery: Keystone XL. Obama’s administration blocked that project in 2015.

At the Dakota Access construction site, law enforcement and protesters clashed violently on several occasions throughout the fall. More than 600 people were arrested, and police were criticised for using water cannons in 25-degree Fahrenheit (minus 4-degree Celsius) weather against activists in late November.

“The granting of an easement, without any environmental review or tribal consultation, is not the end of this fight,” said Tom Goldtooth, executive director of the Indigenous Environmental Network, one of the primary groups protesting the line.

“It is the new beginning. Expect mass resistance far beyond what Trump has seen so far.”

Any legal challenge is likely to be a difficult one for pipeline opponents as presidential authority to grant such permits is generally accepted in the courts. The tribe said in a statement the decision “wrongfully terminated” environmental study of the project.

Deborah Sivas, professor of environmental law at Stanford and director of Stanford’s Environmental Law Clinic, said a challenge by the tribe would likely rely on the reasons the Army Corps itself gave for why more review was needed in December.

“The tribe will probably argue that an abrupt reversal without a sufficient explanation for why the additional analysis is not necessary is arbitrary and should, therefore, be set aside,” she said in an email.

Supporters say the pipeline is safer than rail or trucks to transport the oil.

Shares of Energy Transfer Partners finished up 20 cents at $39.20, reversing earlier losses on the news.

No renegotiation on Brexit deal if parliament rejects it – minister

Plastic money use up 7% in January, JCC says