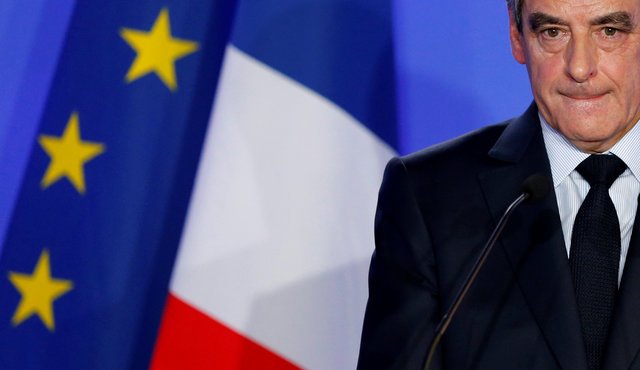 Francois Fillon, 2017 presidential candidate of the French centre-right, reacts during a news conference about a 'fake job' scandal at his campaign headquarters in Paris, France, February 6, 2017

Conservative French presidential candidate Francois Fillon appealed to voters on Wednesday via a newspaper column to back his campaign, after losing his place as frontrunner over accusations of fake jobs for members of his family.

The scandal has forced Fillon to apologise and his popularity ratings have plunged. Opinion polls show independent centrist Emmanuel Macron as the likely winner of the April-May election, beating far-right National Front leader Marine Le Pen in the second round by a two-thirds majority.

“I have decided not to give in to intimidation and pressure. I have chosen to stand in front of the French, to face their judgment,” Fillon said in the Ouest-France regional daily, France’s best-selling paper and widely read in his western France stronghold.

Seeking to regain the offensive and show he had the backing of his party’s stalwarts, Fillon on Tuesday visited the Champagne region, flanked by local member of parliament Francois Baroin, whose name had been mooted as a possible ‘plan B’ candidate.

A source in the Socialist party said grandees in his The Republicans party were unlikely to topple Fillon now, given no clear alternative candidate had emerged and time ran out to organise a new primary.

“They weren’t far (from a party coup), but they got stuck,” the source said.

Fillon‘s show of unity with Baroin did not halt the media scrutiny that has dogged the 62-year-old former prime minister for the past two weeks, after satirical weekly Le Canard Enchaine reported that Fillon‘s wife Penelope had received public money for work she may not have done. It later said two of Fillon‘s adult children had also received taxpayer money.

Fillon has said his wife did do work for him.

On Wednesday, BFM Business, a TV channel, said in an article on its website that Fillon had been paid 200,000 euros in fees by insurance company AXA between mid-2012 and mid-2014 via his consultancy business 2F Conseil.

AXA and Fillon‘s entourage did not immediately reply to requests for comment.

Uncertainty about the outcome of the election, taking place in two rounds on April 23 and May 7, has this week driven the premium that investors demand for holding French over German government debt to multi-year highs.

Stand up for women’s rights