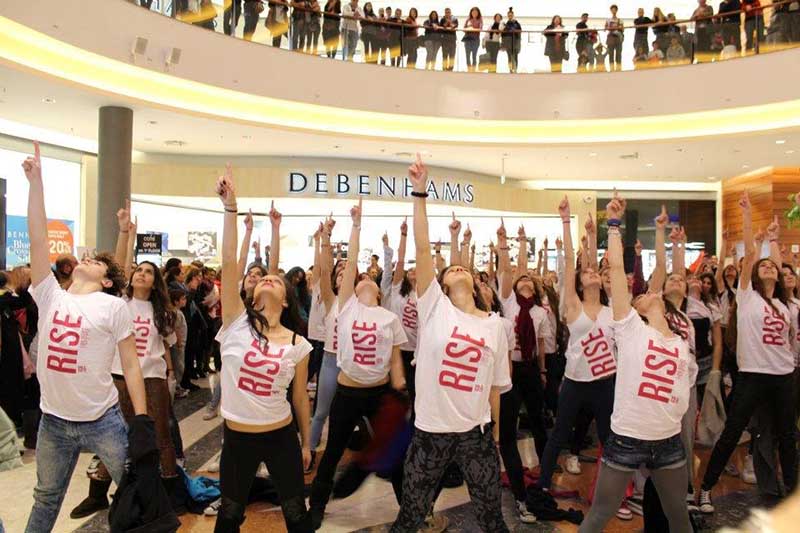 It’s all about all the women this week: one billion of them. Because under the auspices of the Cyprus Women’s Lobby, the people of Cyprus are rising to end violence against women, in a global movement known as One Billion Rising.

The event itself, which takes place on February 11 and involves an awareness-raising march from Phaneromeni in Nicosia to Eleftheria Square, is just one of the many which will be occurring in more than 120 countries around the world this week; the biggest mass action to end violence against women in human history. And it’s a call to action which is based on one staggering statistic: one in three women on the planet will be beaten or raped during their lifetime.

“With the world population at seven billion, this adds up to more than one billion women and girls,” says Maria Epaminonda, President of the Board of Directors of the Cyprus Women’s Lobby, the organisation behind the Cyprus event. “It’s important to send the message to the people, to the state, to the justice system, that we will not tolerate violence against women. We will not tolerate sexual exploitation against women. Our message,” she adds, “is that we are supporting victims, we stand in solidarity with women victims of violence and we want to bring perpetrators to justice. We want to tackle demand that fuels sex trafficking and the exploitation of women. We want to pass the message that buying sex from women victims of trafficking is a crime. We are rising,” she says, “for those who can’t…”

Maria explains that while one in five women in Cyprus are victims of violence, and sexual exploitation of women continues to thrive on the island, a human-centred, gender-sensitive support system for victims and survivors does not currently exist. “Conviction rates are extremely low and sentences are not proportionate to the crime. And, as a result, survivors do not have access to justice and nothing is being done to change attitudes, norms and behaviours around violence against women.

“These attitudes and beliefs towards sexual exploitation, rape and victimisation must change,” she continues. “There is a great need to create awareness and make the public aware that sexual exploitation is a form of violence against women, and we need to put an end to it. We cannot ignore that, around the world, women are raped, are beaten at home by their husbands or partners, are sexually and economically exploited, assaulted in the streets, at work or online. We need to stand up for women’s right, we need to take action.”

And action is being taken: originally launched on Valentine’s Day 2012, February 14 was deliberately chosen as the anniversary of the V-Day movement – a campaign started in 1988 by playwright and activist Eve Ensler, author of the Tony Award-winning Vagina Monologues as an anti-violence movement against women and girls. In the last 20 odd years, the V-Day movement has raised over €66 million for anti-violence programmes and education, and One Billion Rising is part of this process: “A timely and creative protest with the specific aim of raising awareness,” says Maria.

While 2013 saw campaigners across the globe rising in defiance of injustices suffered by women everywhere, 2014 focused on the issue of justice for all survivors of gender violence. In 2015 millions gathered to demand changes to the system which deals with violence against women, and the 2016 campaign focused on marginalised women, calling on people to rise for others, and not just for themselves.

“And in 2017” – designated by the EU as the year to eliminate violence against women – “our aim is to push towards the ratification and implementation of the Istanbul Convention, and for the amendment of the legislation on trafficking in human beings to criminalise, without exception, those who use the services of victims of trafficking,” Maria explains. “Here in Cyprus, we have participated in the event since its inception; One Billion Rising is just one part of our systematic work to end violence against women.

“In past years we’ve seen hundreds of men and women attending the event, and we’re hoping in the future to expand to all cities across the island. And anyone,” she concludes, “who wants to rise with us, can join us on February 11 as we dance, protest, march and rise to demand the cessation of the violence…”

One Billion Rising
February 11 starting at Phaneromeni Square at 12.00 and moving towards Eleftheria Square. For more information visit the Facebook page ‘ONE BILLION RISING 2017’

Somali lawmakers gather at airport to vote for president