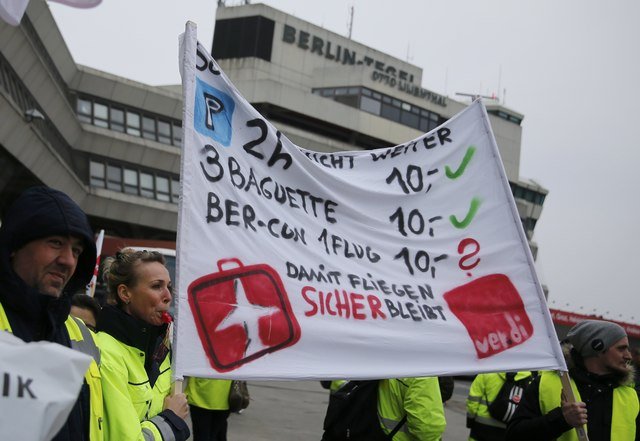 German ground staff went on strike at Berlin’s two airports on Wednesday, forcing the cancellation of 137 flights and delaying many more.

Ground crew, represented by union Verdi, went on strike at Tegel and Schoenefeld airports at 0400 GMT and were due to resume work at 1000 GMT. They want a pay rise of roughly 10 per cent to €12 an hour.

Verdi says ground staff, whose roles include loading and unloading planes and directing them on the tarmac, are paid too little considering safety is paramount in the industry and the workload is increasing due to rising passenger numbers.

Passenger numbers to Tegel and Schoenefeld rose a combined 11 per cent in 2016.

About 500 take-offs and landings were planned for Wednesday at Berlin’s airports, an airports spokesman said. He said no more specific figures were immediately available.

Ground crew were also on strike at smaller airports in Hamburg and Stuttgart.

“It’s a pay level that for the amount of work we do simply isn’t enough,” Verdi negotiator, Enrico Ruemker, told Reuters TV at Tegel. “We’re due to negotiate for the fourth time on February 10 and if no offer is put forward then further strikes are very likely.”

Airlines that serve the German capital, including Lufthansa , easyJet, Air Berlin and Ryanair , had to cancel or delay flights.

Hotel rooms are hard to find as Berlin is hosting a trade fair this week, and easyJet said on its website that it was offering hotel accommodation in Cottbus, about 125 km (78 miles) from Berlin.

Plastic money use up 7% in January, JCC says

Daring to dream the impossible