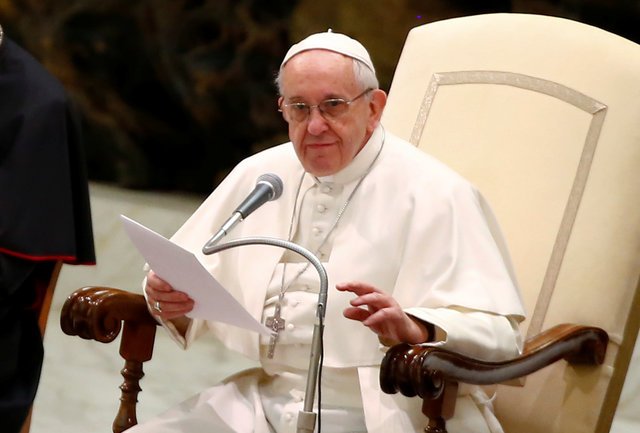 Pope Francis says he is at peace with himself and not taking “tranquillising pills” while dealing with corruption in the Vatican and clergy sexual abuse.

“There is corruption in the Vatican but I am at peace,” he told leaders of religious orders he met last November in the Vatican, according to a transcript published on Thursday.

“Never wash your hands of problems,” he said, according to the Jesuit journal Civilta Cattolica.

At his election in 2013, Francis was mandated to tackle financial scandals in Vatican departments, notably its bank.

He created a new economy ministry to centralise operations, strengthened the power of the Vatican’s Financial Intelligence Authority and appointed a general auditor.

While international monitors have applauded improved transparency in Vatican finances, there has been less praise for his handling of the sexual abuse crisis plaguing the Church for decades.

At the meeting, he said clerical sexual abuse of children was “a clear sign the devil is at work destroying the work of Jesus through those who should be proclaiming Jesus.”

This “sickness” must be spotted early, he said, and student priests better evaluated to weed out potential abusers.

Francis said seminaries should not accept candidates who had been rejected or expelled from other institutions. Child protection advocates say this has happened in the past.

Last month, the pope said bishops must show zero tolerance for clergy abusers and begged forgiveness for “a sin that shames us”.

Francis has taken steps to combat sexual abuse in the Church and to protect children, including appointing an advisory commission with victims among its members.

But victims’ groups say he should go further and discipline bishops who covered up scandals for decades, moving abusers from parish to parish instead of defrocking them.

On Monday, an Australian government commission said seven per cent of Catholic priests working there between 1950 and 2010 were accused of child sex crimes but few were pursued.

Asked at the meeting about his serenity, Francis said “No, I do not take tranquillising pills!” He joked that he followed the Italian saying “to live in peace, you need a healthy dose of not caring”.

“I live in peace. I do not know how to explain this,” he said, adding he was much more anxious when he was archbishop of Buenos Aires.

He said he puts notes about unsolved problems next to a statue of St. Joseph in his bedroom and joked: “Now he is sleeping under a mattress of notes”.

UN chief to visit Ankara with Cyprus on agenda (Update 3)