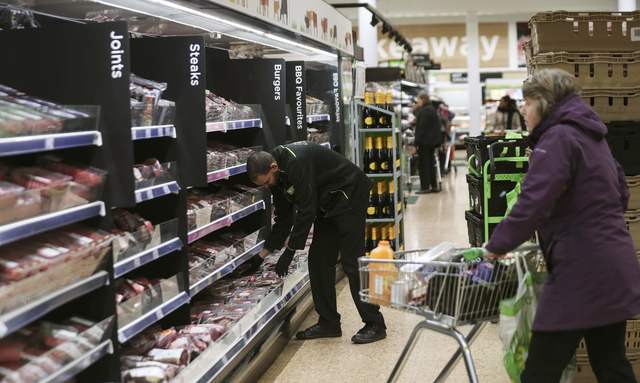 An employee tidies shelves at Asda

In a small factory in a suburb of Birmingham in central England, family-owned Brandauer manufactures a tiny metal component used in the control panel of a car airbag.

From raw material to electrical connector pin in the airbag of a finished car, it will travel between Britain and the European continent as many as five times during the production process — without encountering any customs barriers.

But when Britain leaves the European Union, and likely the bloc’s customs union, such cross-border supply chains could see substantially increased costs and time delays due to tariffs and administrative burdens.

The EU’s customs union allows goods to circulate freely between member states without facing any duties, quotas or customs controls, and applies a common tariff at its external border to goods coming from outside the bloc.

British Prime Minister Theresa May has said she wants to have some kind of customs agreement with the EU in order to have trade that is “as frictionless as possible”.

“Whether that means we must reach a completely new customs agreement, become an associate member of the customs union in some way, or remain a signatory to some elements of it, I hold no preconceived position,” May said in a speech last month setting out her priorities for upcoming Brexit negotiations.

For the boss of Brandauer, a 155-year-old business which began life as a pen-nib manufacturer and now makes 8 million of the airbag components every month, the goal is clear.

“We do need tariff-free trading with the eurozone,” Rowan Crozier told Reuters, speaking over the whir of the large machines nearby which suck in coils of metal at one end and spit out tiny precision-cut components at the other.

Crozier, who voted to remain in the EU, says the government has not provided enough information for him to predict what impact EU tariff barriers might have on the company, which employs 54 staff and produces parts used in everything from plumbing to kettles.

“We have to wait and see, I can’t second guess what might happen. I don’t think we have a plan from the government … They have got a wish list. If they get 50 percent of what they want they will be doing well,” he said.

The copper alloy for the airbag part is made in Germany before being imported to Britain on a large coil where it is stamped into shape by a press at Brandauer’s factory in Birmingham and then plated in a semi-precious coating at a site in nearby Coventry.

That material could face an import duty of 4.8 percent under World Trade Organization rules, if Britain does not agree a more favourable rate with the EU as part of a free trade deal.

It could then be hit with this duty again when the stamped copper is shipped back to Brandauer’s customer in Germany where it is assembled into a control box and connector.

That control box part is sent around the world, including to a subsidiary back in Britain, to be finished off before it ends up in cars assembled on the European continent, including by VW and Fiat.

Safety airbags and their component parts could face average duties of 3.7 percent, while the final vehicles they are used in may then be hit by tariffs of up to 10 percent if they are sold to consumers back in Britain.

It is just one example of the many complex, cross-border supply chains which could be impacted by Brexit.

Analysis of the latest available data from the World Input-Output Database by Credit Suisse last year found that in 2011 around a third of UK exports to the EU were part of EU exporters’ supply chains, a steadily rising proportion.

Future customs arrangements are among the top concerns of British manufacturers, according to industry body EEF, 80 percent of whose members are small businesses and many of whom are in supply chains to larger manufacturing firms.

“They are part of integrated supply chains sewn up in the ecosystem of seamless trade between the UK and EU countries,” said Fergus McReynolds, director of EU Affairs at EEF, which is gathering information from its members on what elements of the current arrangement are most crucial.

“The priority remains as little change to our current trading relationships and as little disruption as possible to supply chains that are essential for the sector.”

Crozier hopes the specialised nature of his business — which operates within tolerances less than the thickness of a human hair — means customers will pay any extra cost rather than look elsewhere, at least in the short-medium term.

The airbag connector pin, for example, is 1 millimetre thick and is made in eight sizes ranging from 20-40 millimetres long.

While day-to-day sales of existing products have remained busy, in some cases boosted by the weaker pound making them more competitive, the longer term is less predictable.

There can be a 4-6 year lead time between a customer enquiry and a product producing meaningful revenue for the company.

“Uncertainty is definitely driving a little bit of a slowing down,” he said. “The half of the business which is about winning new orders, new customers … it is those ones that people are becoming a little bit more cautious about.”

One U.S. company who put an order on hold ahead of the EU referendum last June has not yet come back to say they will go ahead with it, despite the weaker pound making Brandauer much cheaper than their current supplier, he said.

Brandauer exports around a third of its 7.5 million pound annual turnover to China and 15 percent to the United States. Greater trade barriers in Europe could see it switch its focus away from trying to grow the 15 percent it exports to the EU.