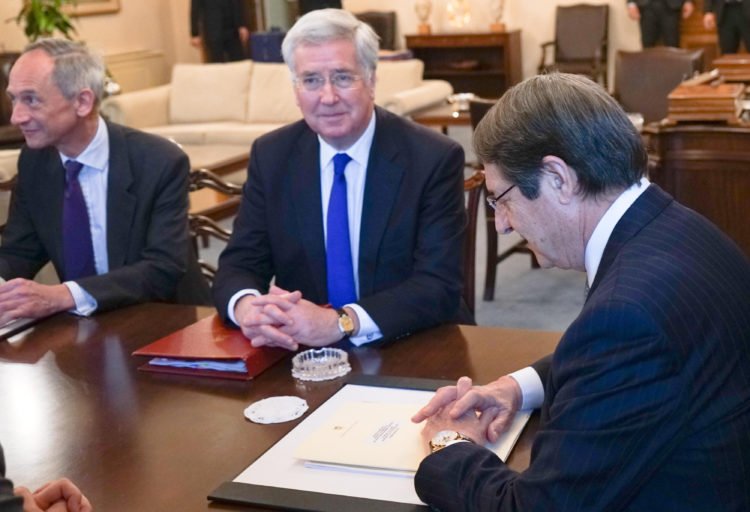 “When emergencies arose, we came to each other’s aid,” the British minister said.

“Last summer we sent 84 Sqn helicopters to help put out the Troodos wildfires, HMS St Albans successfully rescued a stricken Cypriot diver, and we acted side-by-side to keep an eye on migration and stop the people smugglers.”

With regard to further collaboration in future, Fallon said fresh opportunities for the two countries to intensify their partnership are “continually opening up”, whether in Cyprus’ effort to develop its crisis-response capabilities or drafting its national security strategy.

“We also spoke about settlement,” he added, referring to ongoing talks for a solution to the Cyprus problem.

“I’m here at an important juncture for Cyprus’ communities as negotiations continue towards a solution to the long-standing Cyprus issue. As a guarantor power, the UK will do whatever necessary to secure a settlement. […] We are supporting the UN-facilitated settlement process and are ready to consider any future security arrangements the sides can agree on.”

The UK’s offer to cede nearly half of the territory of the Sovereign Base Areas to a reunited Cyprus remains on the table, the British defence minister said.

“I hope this will make an important contribution towards an eventual deal,” he said.

Cyprus’ security risks have changed markedly since the 1960s, Fallon said, noting that “it’s about much more than internal disturbance; it’s about dealing with extremist terror, mass migration, and other threats”.

Thanking Cyprus for its “pivotal role” in the fight against ISIS – “the evil of our times” – Fallon said British aircraft taking off from Cyprus conducted “more than 1,200 strikes in Iraq and Syria over the past two years”.

The first-ever official visit by a British Defence minister to Cyprus certifies the great progress we have managed in the last two years with regard to bilateral cooperation on security and defence, Fokaides said.

“This cooperation is already bearing fruit, to the benefit not only of our two countries, but also of the stability, peace, and security of the broader region,” the Cypriot defence minister said.

“We look forward to the UK’s continued constructive stance with regard to the renewed efforts for a settlement of the Cyprus problem,” he said.

“With a solution to the Cyprus problem, a reunited Cyprus will be able to play an even more pivotal role [in promoting regional stability and security] than it does today.”

Following the British defence minister’s meeting with Anastasiades, government spokesman Nicos Christodoulides said it was very important that the British government acknowledged Cyprus’ “increased role in the region as a promoter of security, which must be further enhanced in a possible solution of the Cyprus problem”.

“This means that the Republic of Cyprus must be able to play its role in the region, and in order to do so it must be a fully sovereign state that can strengthen its relations with neighbouring countries,” he said.

Hundreds of thousands rally in Iran against Trump, chant ‘Death to America’ – TV

Of virtue and profit