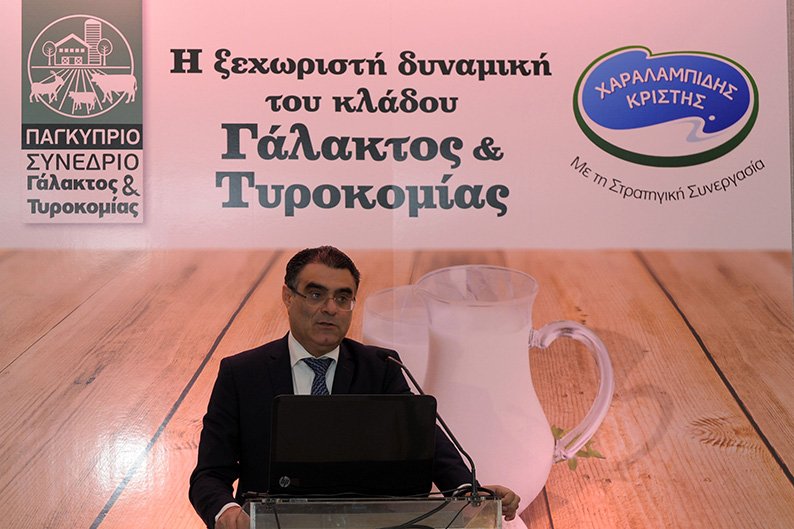 AGRICULTURE Minister Nicos Kouyialis believes that the government measures to boost the production of sheep and goats’ milk will pay off and called on the dairy industry and producers to take action as they cannot rely on state support for ever.

Addressing the annual conference of the island’s dairy and cheese industries, Kouyialis said that the European Commission’s verdict on Cyprus’ application on the registration of halloumi as a Protected Designation of Origin (PDO), would be announced within the next three months.

“We are at the final stage and it is expected that within February, the Agriculture Committee will have completed its task, which is the assessment of appeals filed and I hope that they will be rejected,” Kouyialis said. From then on, he said, the College of Commissioners will decide whether halloumi will be registered as a PDO for Cyprus or not.

The minister expressed his conviction that this procedure will be completed within the next two to three months.

“We have been waiting around for 16 to 17 years, let’s wait a few more months and I hope that everything will go smoothly,” Kouyialis said.

To address the problem of inadequate production of sheep and goats’ milk to meet the PDO specifications, which stipulates that the ratio of goats’ and sheep milk, or a combination of both, needs to be more than the amount of cow’s milk, Kouyialis said that the government has set aside a €40m budget to boost the production of the milk in question.

A third measure is to address the problem of seasonality, as milk production is very low four months per year, Kouyialis said, “to ensure regular milk production year-round”.

The minister said that there is “enormous interest” for this scheme as well as great interest from youth to take up farming. He added that 130 people have applied to create sheep and goat start-ups.

“All these make us feel optimistic and I hope that within the next three years we will have fixed many problems sheep and goat farmers but also cheesemakers are facing,” Kouyialis said.

The registration of halloumi as a PDO, he said, will open new horizons for Cypriot farming and cheese making.

“With exports reaching €103m, halloumi was established as the second most important export of Cyprus after pharmaceuticals,” he said.

Kouyialis also stressed the importance of the contribution of the dairy industry in government efforts to increase milk production.

“This sector cannot rely indefinitely on the contribution of the government. It is time for the dairy industry to reach agreements with the producers, pay encouraging prices that cover production costs … and to simultaneously help dairy farmers produce the final product based on the quality standards the sector needs to satisfy the export market,” he said.

At the same time, he said, producers must utilise the support measures offered to increase productivity and should organise themselves in groups to be in a better position to facilitate their business and to market their products properly.

Trump says Israel should be ‘reasonable’ in peace process