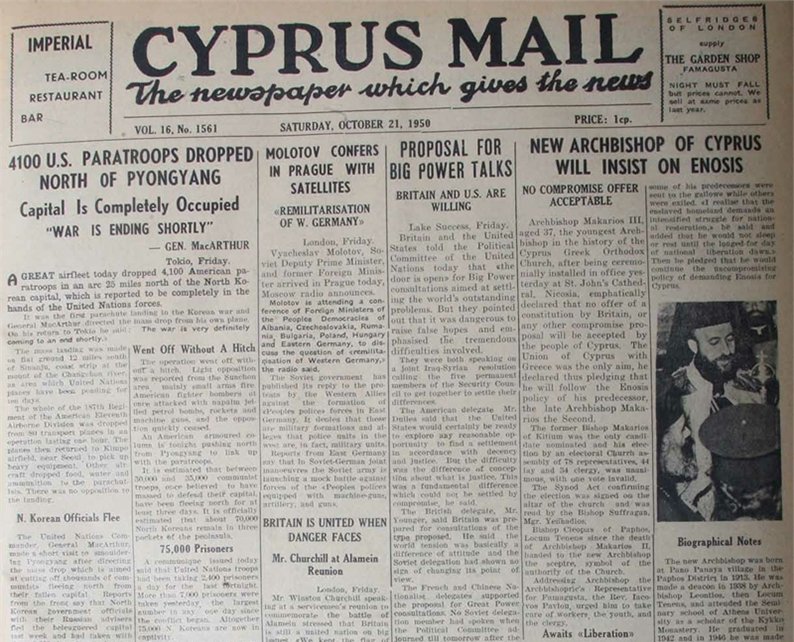 The front page of the Cyprus Mail on October 21, 1950, with the news of new Archbishop Makarios saying he will insist on 'enosis' after the January plebiscite that year (CM archives)

PARLIAMENT on Friday voted to introduce an annual commemoration in public schools of the January 1950 ‘Enosis’ (Union) referendum, in which 96 per cent of Greek Cypriots voted their preference for the island to be annexed to Greece.

In a plenary vote, just 19 votes from the smaller parties – excluding ruling Disy, which abstained, and main opposition Akel, which opposed – were enough for the proposal, tabled by nationalist Elam deputy Linos Papayiannis, to be voted into law.

The desire for ‘enosis’, or union with Greece, is considered one of the main reasons for the breakdown of the independent bicommunal Republic of Cyprus established in 1960.

This is why Akel, along with Disy, the parties most flexible and supportive of ongoing talks to settle the Cyprus problem, lambasted the ruling party’s move to effectively allow the motion to pass.

“By abstaining, Disy allowed the 1950 enosis referendum to be honoured in schools.”

“Disy is between enosis and a solution,” Stefanou tweeted shortly after the vote.

“In the year 2017, our schools will celebrate the anniversary of the Enosis referendum from 1950!!!” Mavrou exclaimed, also on Twitter.

The proposal made it to the plenum through the Education committee, with three votes from Disy and one each from Diko, the Citizens’ Alliance, and Solidarity.

Panicos Leonidou and Christos Orphanides sit on the committee for Diko, while Pavlos Mylonas, Michalis Yiorgallas and Charalambos Theopemptou, represent the Citizens’ Alliance, Solidarity, and the Greens, respectively.

Trump says Israel should be ‘reasonable’ in peace process